3 Common Issues Female Physicians Face (And How to End Them)

Although there are more female physicians and women in medical school than ever before, gender bias remains and poses some serious issues for the healthcare industry as a whole.

Not only do women physicians experience more harassment and less respect than their male counterparts, according to a survey published by CompHealth, but they’re also often paid less and trusted less, despite a recent study by JAMA Internal Medicine. The study found patients 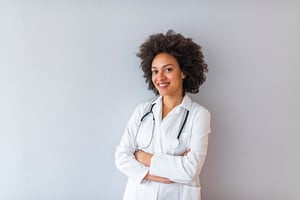 treated by female internists had lower mortality and readmissions rates than those treated by male doctors.

To help achieve gender equality and equity, here’s a deeper dive into a few of the most significant issues facing female physicians, plus a few tips you can begin practicing today.

In a recent Medscape survey of 3,000 female physicians, 64% said work-life balance was their biggest workplace concern. Although men and women are both at risk for career burnout, the lack of work-life balance could be a substantial contributing factor.

While gender roles have shifted in recent decades, caregiver tasks still primarily fall to women. This includes not only childbirth and childcare but also the care of elderly parents.

Overall, female doctors still make less than their male counterparts. And the pay gap is significant — somewhere between 10% and 33%, depending on location and specialty, according to data shared by After Rounds. For example, women in internal medicine earn an average of 80 cents for every dollar earned by male internists, according to data from Reuters.

More often than not, women receive smaller salaries and much lower signing bonuses than male physicians — which is incredibly deflating for a female physician who mentors a new male doctor only to discover he’s being paid much more, right out of the residency program.

“Women physicians are all too accustomed to having the title ‘Doctor’ left out when introduced by colleagues or addressed by staff members and patients,” writes Lisa Esposito in an article for U.S. News & World Report. “They're more likely than male physicians to be called by first name only at medical conferences and in clinical settings.”

But gender bias isn’t only present in the way colleagues refer to each other. According to the same article, invitations to speak or participate in medical panels are disproportionately expended to male physicians, despite women colleagues having similar qualifications and expertise.

Additionally, a JAMA Network Open paper recently reported that female pediatricians are less likely to be first authors of a perspective piece — meaning they are given far fewer opportunities to state their opinion and insights on the field in which they practice.

Changing the Future of Gender Equity in Medicine

Gender disparities can seem defeating, but there’s a lot we can all do to help end gender bias in medicine:

Educational intervention, peer support, and strategies designed to dismantle gender bias are essential for ending workplace disparities and ensuring patients get the best possible care. By taking the above actions, you can help drive this necessary change.