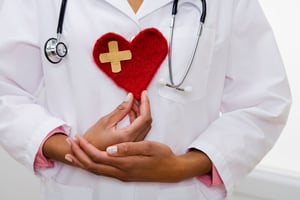 In 2007, medicine’s most famous feud ended. For 40 years, Drs. Michael DeBakey and Denton Cooley had barely spoken to each other. It started in 1960 when Cooley left DeBakey’s practice to work at St. Luke’s Hospital in Texas — and eventually start the Texas Heart Institute.

But it was what happened nine years later that turned a disagreement into a full-blown feud. Without approval from DeBakey or his team, Cooley commandeered an artificial heart from DeBakey’s lab and implanted it in a dying patient at St. Luke’s Hospital.

What made this feud so remarkable was not just its length, but the fact that cardiac and cardiothoracic surgery was still in their infancy when it occurred. In 1966 — only three years before the feud blew up — DeBakey successfully implanted a partial artificial heart into a patient.

The two eventually reconciled after DeBakey received the Congressional Gold Medal for his many achievements — surgical innovations, the creation of MASH units, and helping to develop the Veterans Association medical system.

Without the contributions and hard work of DeBakey and Cooley, the field of cardiothoracic surgery would not be where it is today, and advancements are continuing thanks to the contributions of cardiac surgeons across the country.

We wanted to know who is innovating and leading the way now, so we put together a brief report looking at some of the top contributions of today’s cardiothoracic surgeons.

The report details the work of seven top cardiothoracic surgeons, what the future of the profession looks like and what technology and tools will play a role in future advancements. Get your copy of the report today.