In the second half of the 20th century, a group of surgeons advanced the work of early pioneers in cardiothoracic surgery who had first introduced surgical procedures to relieve heart disease. Two of these men were from institutions in America’s heartland: Dr. John Kirklin worked at the Mayo Clinic in Rochester, Minnesota, while at nearby University of Minnesota in Minneapolis; and Dr. Clarence Walton “Walt” Lillehei pioneered open heart surgery. 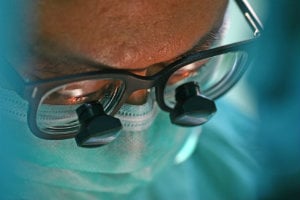 Lillehei was 31 and a senior resident when he was diagnosed with cancer of a salivary gland. The prospects were poor. He was given only a 10% chance of surviving five years. Dr. Owen Wangensteen, his mentor at the University of Minnesota, was one of the team of surgeons who removed the tumor the day Lillehei completed his senior residency in 1950. Radiation therapy followed and although he recovered, the cancer left him with a deformed and crooked neck.

During his tenure at the University of Minnesota, he trained some 150 cardiac surgeons from 40 countries and contributed to hundreds of papers and articles. Among his trainees were Dr. Christiaan N. Barnard, the South African who in 1967 performed the first heart transplant, and Dr. Norman E. Shumway, who devised the technique for such transplants. Dr. Denton Cooley of the Texas Heart Institute was also one of his protégés.

Dr. Lillehei pioneered techniques and instruments that made heart surgery possible. These included a heart-lung machine that bubbled oxygen through the blood during an open heart procedure. In 1958, he was responsible for the first use of a small, external, portable, battery-powered heart pacemaker, invented at his behest by Earl Bakken, whose small company, Medtronic, designed and repaired electronics at the university hospital. Lillehei also developed and implanted several innovative designs of prosthetic heart valves.

In 1967, Lillehei was named Stimson Professor of Surgery and chairman of the department of surgery at Cornell University Medical Center in New York City. As surgeon-in-chief at Cornell-affiliated New York Hospital in 1969, he led the team that performed the second transplant of heart and lungs into a 43-year-old man suffering terminal lung and heart failure from chronic emphysema. The patient survived for one week.

In 1975, with failing eyesight, Lillehei returned to St. Paul, Minnesota, to become director of medical affairs at St. Jude Medical Inc., and clinical professor of surgery at the University of Minnesota. Flamboyant and non-traditional, Lillehei incited criticism. But his peers remember his ingenuity, imagination and boldness that resulted in the innovations that made it possible to operate on the open hear. Following his death from prostate cancer at 80, family members donated more than $15 million from Medtronic and other royalties to help create the Lillehei Heart Institute at the University of Minnesota.