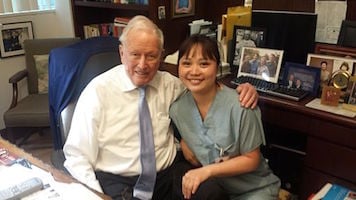 "What he did, more than anyone else, was make heart surgery safe." —O.H. Frazier, M.D. (Denton Cooley protégé)

Denton Cooley, one of the greatest heart surgeons of the 20th century, was a third-generation Houstonian. He was born in 1920 in comfortable economic circumstances. His father was a successful dentist; his maternal grandfather, a physician. As a young scholar and athlete, Cooley showed great promise. As a youth, he was inspired by his parents and a family friend who also was his mother’s obstetrician, Dr. E.W. Bertner, who later founded the Texas Medical Center.

After high school, Cooley matriculated at the University of Texas (Austin) as a pre-dental student, only to switch to pre-med (zoology) after visiting a nearby emergency room where he was allowed to suture his first lacerations. For medical school, he went to Johns Hopkins in Baltimore where he graduated with a Doctor of Medicine in 1944. While at Johns Hopkins Medical School he became the chief surgical resident of Alfred Blalock and assisted at the first Blalock-Taussig (blue baby) procedure performed for tetralogy of Fallot.

In a 2007 interview for Houston’s Oral History Project, Cooley recalled, “And that was really, I think, the dawn of heart surgery and it gave me the opportunity to be a witness and a participant in the evolution of this new specialty of cardiac surgery. Prior to that time, surgeons were discouraged from ever trying to operate on the human heart. There were many admonitions given by predecessors in medicine about surgeons invading the heart. But from that day forward, the door gradually opened or rapidly opened for all sorts of surgery.”1

After stints in the army as a surgeon and at Brompton Hospital in London, Cooley returned to the United States in 1951 as a faculty member at Baylor University Medical School in Houston where Michael DeBakey was the newly appointed chief of surgery. Both men were highly competitive and had big egos. DeBakey preferred a more traditional approach to research, beginning in the animal laboratory before conducting clinical trials. Cooley’s focus was in the OR where his patients served as his study models.

Over time, Cooley resented his treatment by DeBakey, who was known to terrorize his subordinates. After DeBakey excluded Cooley from plans to develop a total artificial heart or to create a transplant program at Baylor, Cooley broke from DeBakey and devoted himself to building the Texas Heart Institute based at St. Luke's Episcopal Hospital, which he had chartered in 1962 just across the street from Baylor’s Methodist Hospital, DeBakey’s domain.

At Texas Heart, in April 1969, Cooley implanted the first artificial heart in a 47-year-old patient. The device kept the patient alive for three days, which proved sufficient time for a donor heart to be found and transplanted into the patient. Unfortunately, the patient succumbed to pneumonia 32 hours later. Although the first artificial heart implantation and first heart transplantation the previous year by Cooley were hailed as milestones, they created a major controversy and schism between Cooley and DeBakey that lasted 40 years.

Cooley led his Texas Heart team by setting a good example and being willing to take risks and try innovative solutions. Under his leadership and inspiration, more than 100,000 heart operations were performed at the Texas Heart Institute by 2001, more than any other institution in the world. In his memoir 100,000 Hearts: A Surgeon's Memoir, Cooley also lists 33 personal firsts in cardiovascular surgery.2 He authored or coauthored over 1,400 journal articles and eight textbooks. He could indeed be called “The King of Hearts.”