When professor Stephen Westaby, a heart surgeon at John Radcliffe Hospital, Oxford, England, decided to go to the United States to refine his surgical skills, he was advised, “Go to Kirklin. There you will learn discipline.” 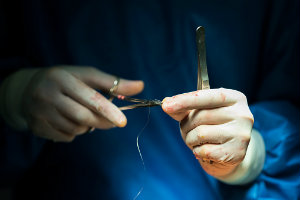 After his army service, Kirklin returned to the Mayo Clinic to complete his surgical residency and join the staff. His great accomplishment at Mayo was to improve John Gibbon’s heart-lung bypass machine that allows a patient's blood to continue circulating even though the heart has been stopped. He then performed the first series of successful operations with it.

One visitor to Kirklin’s OR was Donald Ross from Guy’s Hospital, London. “Kirklin was very impressive. … Walking into Kirklin’s operating room was like walking into a church; there was no sound, no excitement. We sort of sat in pews watching him as he quietly talked. The door opened, the heart-lung machine was wheeled in and connected to the patient, and he then did the operation. I was dumbfounded that you could do this very complex procedure so quietly with no drama. Kirklin was cool and calm.”

In 1966, the University of Alabama at Birmingham (UAB) recruited him to chair its Department of Surgery. The reason he left the Mayo Clinic, he later stated, was the question of whether in the last 15 years of his professional he wanted to keep on doing what he had done the first 15, or whether he wanted to do something different. He said the environment in Birmingham was better and freer than in Rochester to bring about his ideas for a department of surgery and the training of surgeons.

Kirklin established UAB as one of the leading clinical and academic medical centers in the nation. There, as he continued his investigative work in surgery, he developed a strong department. His organizational ability and vision led to the establishment of a private foundation at UAB to support the expansion of the medical school and hospital. He also started a Surgeon Assistant (SA) Training Program in 1967 and recruited his wife, Dr. Margaret Kirklin, to be the program’s first Academic Director.

Kirklin was known as energetic and disciplined. An article in the UAB Magazine 1992 spring/ summer issue states: “In surgery, as in life in general, Kirklin believes in what works. He seeks efficiency. And he believes that efficiency is enhanced by orderliness, by meticulous attention to detail, and by simplicity and economy ... He believes that streamlining the surgical process into a quiet, deliberate ritual creates an atmosphere of calmness that can, to some extent, counteract human fallibility by freeing up the surgical team’s mental energies to improvise in a crisis.”

Kirklin remained Chairman of the Department of Surgery until 1982, and then continued as editor of The Journal of Thoracic and Cardiovascular Surgery. He wrote or contributed to 700 academic articles. Among all of his accomplishments it is likely that Kirklin looked upon his textbook of cardiac surgery as his greatest contribution. It quickly became the standard reference in the field.