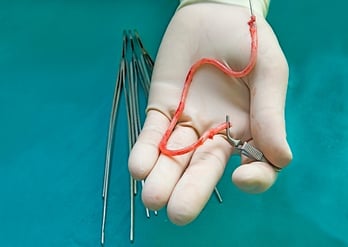 They also investigated any major adverse cardiac events such as death, myocardial infarction or repeat revascularization during that time frame.

For their study, they used retrospective coronary artery bypass flow measurements in 44 patients that included 65 saphenous vein grafts, and 41 arterial grafts. Transit time ultrasound flow measurements were performed after cardiopulmonary bypass or completion of all grafts with 2 to 4 mm Flowprobes. Also, grafts were imaged with the Novadaq SPY Imaging System after each distal anastomosis and proximally after separation from cardiopulmonary bypass (CPB).

Post-op angiography results showed that 21 vein grafts were occluded; one vein graft had more than a 50% stenosis and 41 arterial grafts were patent. Mean flow was a significant predictor of early vein graft failure and a mean flow of 31 mL/min was the best cut-off value to predict a patent graft. Pulsatility Index (PI), diastolic filling (DF), other flow values, patient comorbidities and/or medication at discharge were not predictors of graft failure.