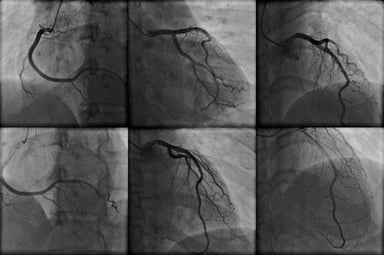 Intraoperative flow measurements during coronary artery bypass grafting are performed to detect technical problems at the time of surgery when correction is relatively simple. One tool in the surgeon’s arsenal to detect a graft in trouble is Pulsatility Index that combines mean flow and waveform properties into one number. Introduced by D’Ancona and colleagues about 2000, the Pulsatility Index is simply calculated by subtracting the minimum recorded flow from the maximum recorded flow and dividing the difference by the mean flow. D’Ancona and colleagues suggested that a PI between 1 and 5 would indicate a good graft, while a PI greater than 5 would indicate a suspect graft. PI quickly caught on as a reliable indicator of graft patency and was soon added to the display screens and printouts of flowmeters to be used as a major indicator of a good graft. Studies were performed using PI as one endpoint for assessment of grafts and comparison of flowmeters.

Surgeons beware: False negatives can occur. PI does not apply well to every graft in each and every condition. An acceptable PI of less than 5 doesn’t always indicate a patent graft. A poor graft can still have a PI of less than 5. For instance, competitive flow will reduce mean flow and increase pulsatility. A proximal stenosis or a partial distal stenosis may greatly reduce pulsatility and mean flow. Sole reliance on PI would produce a false negative and possibly obscure a correctable technical error.

The following case demonstrates this point. A 65-year-old male patient underwent CABG to bypass a lesion in the left anterior descending (LAD) artery with a left internal mammary artery (LIMA) graft. The initial PI was 3.8. This would usually indicate a patent graft. However, LIMA-LAD mean flow only measured 8.8 mL/min. The graft was revised and mean flow improved to 60 mL/min. The 0.8 PI was accompanied by a classic, diastolic dominant waveform profile. The take-home lesson from this and other examples is that one should not rely solely on PI to determine graft patency. 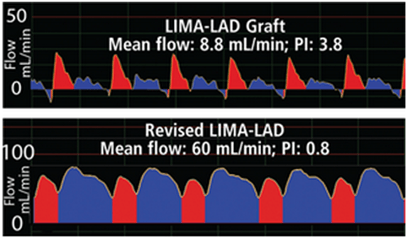