Lymphedema, also known as lymphatic obstruction, is caused by a blockage in the lymphatic system which is part of the immune and circulatory systems. In patients with lymphedema, lymph does not return to the bloodstream via the thoracic duct as normal, but collects in the interstitial tissue causing swelling that can lead to decreased function, mobility, and other complications.

While most often associated with the removal of lymph nodes during breast cancer, lymphedema can result from treatment for other cancers, infection, trauma, scar tissue, parasitic infections, or anything that changes, blocks or interrupts the flow of lymph through the lymphatic system. Between 38 and 89% of breast cancer patients suffer from lymphedema due to axillary lymph node dissection and/or radiation. The greater the number of lymph nodes removed, the higher the risk for developing lymphedema.

The traditional treatment for lymphedema is exercise, wrapping, massage, and compression. However, when these do not alleviate the sometimes debilitating symptoms, surgeons have turned to lymphatic supermicrosurgical lymphaticovenous anastomosis (LVA) to alleviate symptoms and improve the quality of life of lymphedema patients. A LVA connects a collecting lymphatic vessel and a subdermal vein in order to bypass obstructed areas and redirect lymph back to the circulation. 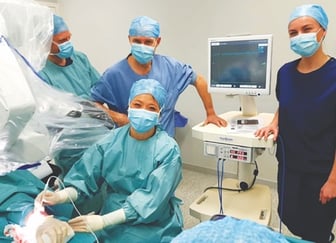 Supermicrosurgery surgeons at Maastricht University Medical Center in the Netherlands have now published a landmark study of measuring lymph flow directly in 25 lymphedema patients who underwent LVA surgery. The objective of their study was to measure lymph flow using transit-time ultrasound technology (TTUT) before and after LVA in patients with peripheral lymphedema. Their hypothesis was that both before and after anastomosis, a flow >0mL/min is measurable in the lymphatic collecting vessel, indicating patency of the anastomosis and restoration of lymph drainage. Twenty-five consecutive patients with stage IIA (68%) and stage IIB (32%) peripheral lymphedema had a preoperative workup that included indocyanine green (ICG) lymphangiography. During surgery, a 0.7mm Transonic Microvascular Flowprobe was used to measure lymph flow before and after anastomosis. Blood flow in the subdermal vein was also measured. After the LVA was performed, anastomotic flow was measured at the site of the recipient vein. Changes of the lymphatic flow values measured in the lymphatic collecting vessel and after in the recipient vein of the LVA were collected and described. To avoid unnecessary extension of the duration of the surgery, measurements were completed in one LVA per patient, regardless of the total number of LVAs performed in that patient.

After past challenges in the assessment of lymph flow, the surgeons concluded that the TTUT Micro-Flowprobe is a suitable instrument to measure real-time quantitative lymphatic flow in both lymphatics and LVA. It can confirm patency of lymphatic collectors and LVA perioperatively. They suggest that the values described in their study could form a basis for future investigations of lymph flow and lymphedema and advise that further studies should be performed to evaluate lymph flow values and clinical correlation.

This study builds on the 2015 investigation of Dr. Chen at the University of Iowa in which he reports the first direct measurements of human lymph in a total of 28 lymphatic vessels and 15 LVAs. He also used a 0.7 mm Transonic Flowprobe to assess the health and function of the lymph vessel both before and after constructing an anastomosis.