Is a Graft Bad When Mean Bypass Flow Is Lower Than Expected?

Flow-based intraoperative bypass graft patency assessment during CABG confirms a graft’s flow-carrying capacity to prevent early graft failure. But sometimes bypass graft flow does not meet expectations. Where would you look if, after you have constructed a graft and measured flow, the graft flow is less than one would anticipate given the health and size of the conduit and the physiology of the patient?

Although it is optimal to assess competitive flow immediately when bypass graft flow is measured, it is more practical to check for competitive flow only if mean bypass flow is less than expected or in the questionable range. 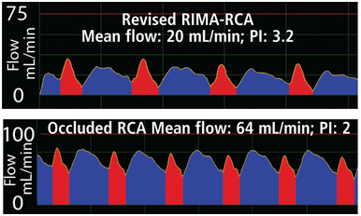