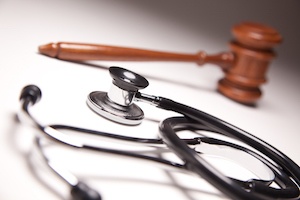 A recent study published in JAMA Surgery found surgical and junior residents are particularly vulnerable to these lawsuit filings. During a 10-year period, 87 malpractice cases involving surgical trainees were identified by Westlaw, an online legal research database containing legal records from across the United States

Researchers discovered most malpractice claims filed against surgical residents involved their focus on perioperative knowledge and their decision making.

Seventy percent of the cases came from elective surgeries and the most claims were filed against the following specialties:

Why claims were filed

Interestingly, malpractice claims were filed in 10 cases in which the surgical resident made a care decision, like increasing the dose of or changing the patient’s pain medication, without evaluating the patient in person. These cases had disproportionately high payouts with the average being $1,203,000 in favor of the plaintiffs.

In 48 of the 87 malpractice cases, a contributing factor was insufficient supervision of surgical residents by attending physicians.

‘"...the attending physician's failure to appropriately supervise part of an operation in person was cited," the authors write. "Three cases claimed that intraoperative injuries were the result of residents becoming anatomically 'lost' without an attending physician present."’

In addition to providing better supervision for residents, researchers suggest residents and their attendings should be aware of their emotional well-being. Physician burnout is associated with a recent malpractice suit, and nearly 69 percent of surgical residents meet the criteria for burnout.

The American College of Surgeons recommends implementing the following practices to improve resident learning and supervision:

By taking steps to improve resident training and providing adequate supervision, physicians can help lessen the possibility of their students being involved in a malpractice suit.