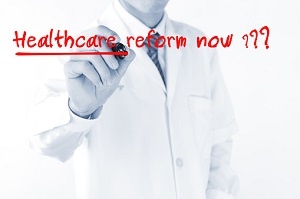 Despite the conservative political climate of the 1950s, disability insurance for workers over the age of 50 was passed in 1956. Once again, it served as an incremental achievement for healthcare reform.

A year later, Rhode Island Democrat Aime Forand proposed a bill for Medicare for the elderly. The American Medical Association (AMA), which had successfully lobbied during the Harry Truman administration against healthcare reform, again took to the warpath against the Forand bill. The group argued that the bill would impose an unwelcome government intrusion into private medical practice, and the bill’s passage would be the first step toward national socialism. The bill never reached the House floor for a vote.

The Forand bill did raise awareness of the plight of the elderly in this country. A special Senate subcommittee on aging was created, headed by Democratic Sen. Pat McNamara from Michigan. Between 1959-1961, a series of public hearings on aging were held in 38 cities across the country. Awareness of issues for older adults, especially health insurance, increased.

Two approaches to providing coverage for the elderly emerged. The Forand Social Security approach aimed at covering health costs for all elderly adults to be funded by additional Social Security taxes. A second welfare approach intended coverage for those over 65 who could not pay for medical expenses themselves. It would be funded by federal income taxes and state taxes. The Social Security approach covered hospitalization, nursing homes and surgical care, while the welfare approach extended coverage to physicians’ services, dental care, drugs and hospital expenses.

Aware that the political climate was changing and passage of some type of Medicare legislation was in the offing, congressional conservatives—including Robert Kerr of Oklahoma and Wilbur Mills of Arkansas—came up with a bill that proposed to expand federal aid to states that were already providing medical care insurance to poor older adults. Endorsed by the AMA, the bill passed and was signed by President Dwight D. Eisenhower in 1958. However, the legislation had limited success. A number of states never participated in the program and, by 1965, the five large states—California, New York, Michigan, Massachusetts and Pennsylvania—used almost 90% of the Kerr-Mill funds.

When John F. Kennedy ran for president in 1960, Medicare legislation became an important part of his 1960 campaign. Enactment of healthcare for older adults by the end of the year was one of the goals set out in Kennedy’s New Frontier State of the Union address. However, political issues and the pressure for Kennedy to achieve legislative success in other areas prevented his Medicare bill from coming to the floor. Again, the AMA opposed the bill and mounted a campaign to prevent its passage during Kennedy’s short presidency.

Passage of Medicare under LBJ

Lyndon Baines Johnson’s landslide victory into the White House in 1964, a year after the assassination of President Kennedy, also gave him large Democratic majorities in the House of Representatives and Senate.

Some type of healthcare insurance for the elderly was inevitable. Disparate groups wanted to become part of the action. John Byrnes, the ranking Republican on the House Ways and Means Committee proposed a bill that would provide voluntary health insurance for older adults. The AMA offered its own proposal, Eldercare, to be implemented by states. By February 1965, three different proposals were before Congress: the King-Anderson bill, the Byrnes Republican proposal and the AMA Eldercare proposal. By February 1965, three proposals were on the table.

After much negotiation, a 296-page Medicare bill compromise was presented to Congress in March 1965 that included aspects of all three bills. The bill proposed that two amendments be made to the existing Social Security legislation: Title 18 (Medicare) and Title 19 (Medicaid). Triumphant passage of Medicare and Medicaid took place in Independence, Mo., on July 30, 1965 in honor of President Truman’s advocacy for this type of legislation.