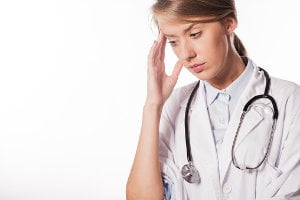 The council argues that the new proposed hours could improve patient care because the number of times a patient is handed off to a new resident is reduced.

In an article in Stat, Dr. Christopher Lee Bennett reports on something that may not be that surprising: Most residents are working longer than the allotted hours and not admitting it. Why are residents exceeding their hours? They need to finish patient notes and charts, or they feel external pressure from their attending or other authority figures.

Residents Often Feel Guilty Leaving When Their Shifts are Over

Dr. Jennifer Adaeze Okwerekwu felt that pressure after finishing her workday and handing off a case to the night team, and working long shifts left her feeling stressed.

“After just two weeks on these ICU hours, already I felt unbalanced. My life outside the hospital was put on hold. The more time I spent caring for my patients, the less I cared for myself. I didn’t have time to cook healthy meals, exercise or even spend quality time with my family,” she explained.

Despite a study showing no difference in mistakes or patient deaths when surgical residents had less restrictive hours, Bennett argues the profession needs to first address the guilt and pressure that drives residents to work longer hours.

Adaeze Okwerekwu notes that it’s nearly impossible to maintain a work-life balance as a physician.

“If we do seek that balance, and make the choice to leave at the end of a shift to take care of ourselves, the implication is often that we’re selfish. The act of walking out the door when your day is done can call into question your professionalism, empathy, and commitment.”

What are your thoughts on resident work hour limits? Should they be extended? Are residents at your facility feeling pressure or guilt at the end of their shifts? Log your comments in the section below.