It’s no secret that today’s smartphones can store a lot of valuable information. What you may be surprised to learn is that patients are often recording their doctor visits.

In fact, according to research from the Dartmouth Institute for Health Policy and Clinical Practice, it’s likely that at least one patient out of your last 10 has recorded their visit. 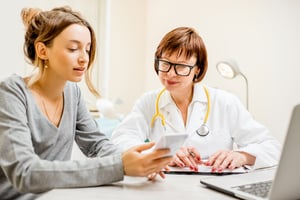 Whether it’s a routine appointment or a surgical procedure, the practice of recording doctors is a debated issue. That’s why it’s so important to understand both sides of the issue before saying yes.

A patient’s ability to record doctor visits varies across the U.S. While 11 states (California, Florida, Illinois, Maryland, Massachusetts, Michigan, Montana, New Hampshire, Oregon, Pennsylvania and Washington) require the consent of both the physician and the patient, the other 39 only require only one-party consent. That means that in the m

Majority of states, patients could secretly be recording doctors without their knowledge.

For some physicians, this can be a rather sensitive topic. If a malpractice lawsuit occurs, you might fear that a patient could use recordings as evidence. You might also worry that patients could share this information on social media or another public platform.

While these concerns are valid, doctors shouldn’t only view recordings in a negative light. Patients often decide to record doctors for much more beneficial reasons.

Why Patients Want to Record Doctors

When patients first hear their doctor’s orders, it can sometimes be overwhelming to digest everything. This may cause them to miss out on particular parts of the conversation. With recordings, patients can easily go back and review their doctor’s instructions, leaving less room for error and facilitating better outcomes.

Patients also want an effective way to share their medical information with family and caregivers. Recordings ensure the accurate communication of guidelines to the patient’s support system, while giving them time to reflect on it all. Having everyone on the same page prompts greater compliance from all parties.

What to Consider Before Allowing Recordings

In states that require both parties’ consent, doctors have the option to either refuse or allow patient recordings. But in many one-party consent states, patients may also ask physicians for their permission to record conversations. Physicians should check their hospital or practice policies before allowing this.

Before you say yes in either case, you’ll want to consider the current state of patient and doctor communications. If your patients consistently have trouble understanding guidelines or sharing them with others, allowing recordings could prove helpful.

Think about the goals of your hospital or office as well. Perhaps there is a focus on fostering greater transparency in healthcare or improving patient engagement. Recorded conversations can help fulfill both needs.

When it comes to a doctor-patient relationship, the choice to record doctors adds a new layer of complexity. But what it also adds is the potential to foster a stronger relationship between patients and doctors—one built on trust and loyalty.

There are no related posts