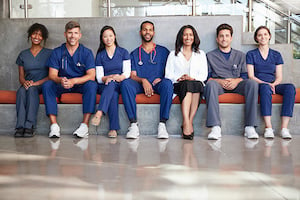 Physicians are generally pretty happy, according to new data from the 2019 AAFP/CompHealth Physician Happiness Survey, but they’re also highly stressed, too.

After recent reports of physician burnout and poor work-life balance, the survey, which consists of responses from more than 5,000 physicians across the U.S., provides hopeful and eye-opening information about what impacts doctors at work — and from where they draw the most satisfaction.

Here are five important takeaways from this survey. 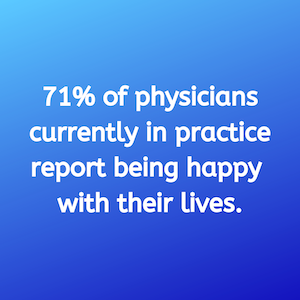 Physicians in 2019 are generally happy, but older doctors (those who have been in practice for more than 30 years) report the highest levels of satisfaction (68 percent). And 61 percent of physicians said if they had the choice to live their lives over again, they’d still become physicians. 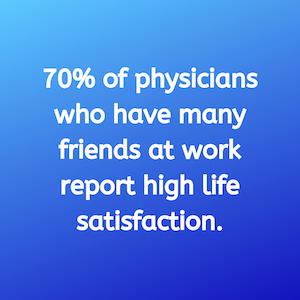 As you might expect, a large and supportive social circle at work has a significant impact on physician work-life experience. On the flip side, only 39 percent of physicians who said they have no friends at work reported being highly satisfied with their life. On a related note, only 50 percent of physicians surveyed reported having positive relationships with administrators, which could put a strain on workplace efficiency and the clinical environment. 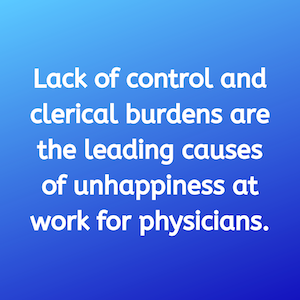 Of the top issues driving unhappiness at work, 72 percent said a lack of control, 71 percent said clerical burdens and 69 percent reported being emotionally exhausted. Physicians also cited a lack of staff support and time constraints as contributing to higher rates of unhappiness. Insufficient pay ranked lowest on the list.

Less than one-third of physicians surveyed said they felt their organizations made physician well-being a top priority, which is a troubling statistic considering physician burnout was recently declared a public health crisis. However, despite the lack of support for their well-being, 68 percent of physicians said they still feel they’re able to do their job efficiently. 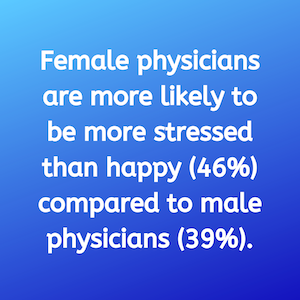 When it comes to happiness and stress, gender matters. Women report higher rates of stress and lower rates of happiness than men. However, women also say they find working with patients more gratifying (90 percent) compared with men (86 percent) and are more likely to report spending more time with patients. 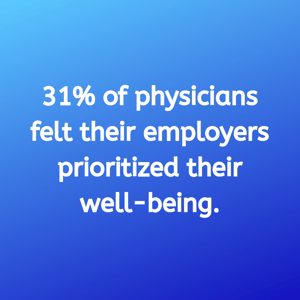 While physicians are mostly happy and satisfied with their lives, there is still plenty of room for improvement when it comes to reducing stress and improving doctors’ well-being. As a physician, it’s critical you recognize what impacts your happiness and communicate with your employer. When healthcare organizations prioritize physician satisfaction, everyone benefits.