Strokes Can Strike at Any Age: Know the Signs

While the risk of stroke increases with age and other health factors, that doesn’t mean younger people are impervious. Strokes can strike anyone: a 40-something-year-old on his way home from the office, a newborn baby, your active older neighbor or a teenager.

Strokes are more common among those over the age of 65, but between 10-15 percent of strokes occur in people ages 18 to 50. And the American Heart Association warns those numbers are on the rise.

Knowing the signs and symptoms of a stroke – at any age – is key to responding quickly and increasing the chances of survival and recovery. This month, for National Stroke Awareness Month, we’re looking at some of the most common stroke signs you should know about to keep yourself and your loved ones safer.

One of the most well-known acronyms to easily remember the signs of a stroke and what to do is F.A.S.T. You may see it circulating on social media during Stroke Awareness Month or come across it during first aid training.

These stroke indicators can look like an uneven smile or drooping on one side of the person’s face. They may feel numbness on that side. Likewise, one arm may feel weak or numb. Ask the suspected stroke patient to lift both arms and see if one unintentionally drifts downwards. Their speech may sound slurred, or they may have trouble speaking or understanding.

If these signs are present, call 911 immediately. 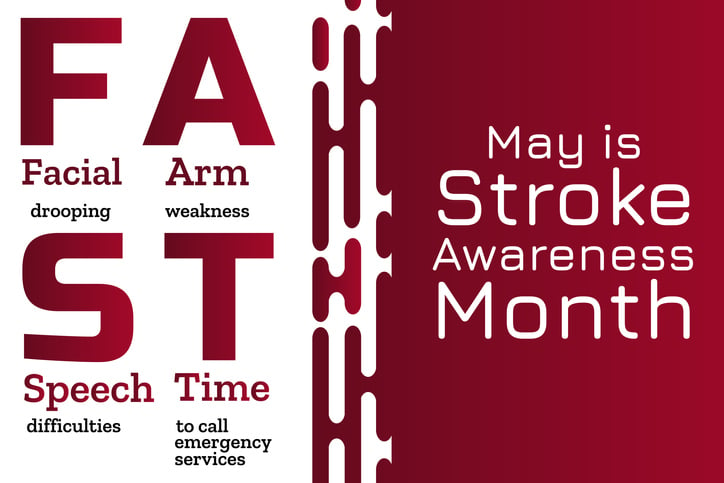 Other Stroke Signs and Symptoms

In addition to numbness or weakness on one side of the body, other stroke symptoms include:

The importance of a quick response to stroke symptoms cannot be overstated. Patients who received emergency treatment within three hours of their symptoms first appearing have a higher chance of recovery and less disability three months after a stroke compared to those who delay seeking care, according to the CDC.

One of the reasons emergency care is so critical is because some early treatment medications used to limit the impact of a stroke – thrombolytic medications, or ‘clot-busting’ drugs – are most effective within a narrow window of time. A matter of hours really can make all the difference.

Earlier this year, 25-year-old model Hailey Bieber – married to singer Justin Bieber – shared with her extensive social media following that she had experienced stroke-like symptoms. She was rushed to the hospital, where doctors found a small blood clot in her brain. She has since recovered.

Because of her celebrity status, Bieber’s experience sparked extensive discussion, particularly among a segment of people who typically don’t talk about things like strokes, but she is far from the only young person who experiences symptoms of a stroke.

Every year in the United States, about 70,000 people under the age of 45 have a stroke. The risk factors and types of strokes differ slightly from those over the age of 65, but the results can be equally devastating if not treated promptly.

No matter the age, if someone is experiencing symptoms of a stroke – dial 911 and seek emergency care immediately.