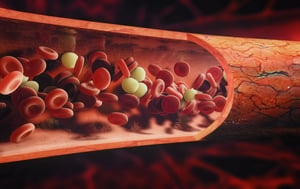 Using smaller cannulas for minimally invasive surgery or aggressive cardiopulmonary bypass circuitry miniaturization have increased the need to augment venous drainage to achieve adequate flow rates. This is achieved through vacuum-assisted venous drainage (VAVD) which has been associated with a number of side effects, including: