The Heart Is More Than a Pump 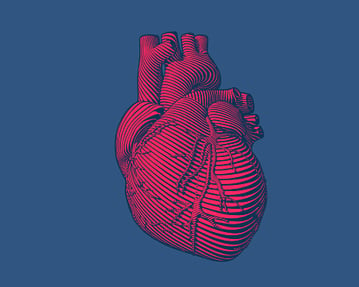 However, if we think of the heart only in terms of its blood pumping action, we are ignoring at least two other important functions of the heart, its endocrine function, and its neurotransmitter function.

The morphology of the heart was extensively studied throughout the 20th century, but it was not until in 1964 that Jamieson et al1 reported the discovery of granular cells in the atria of the mammalian heart that serve a secretory function. His report was followed in 1976 when Marie et al2 reported that that the formation of these granules could be influenced by changes in the hydroelectrolytic balance. Then, in 1981, De Bold et al3 demonstrated that intravenous injection of atrial extracts provoked a rapid and massive diuresis and natriuresis in the hearts of rats. His landmark research led to the isolation, purification, and identification of a family of cardiac natriuretic and vasodilator peptides. Soon, it was demonstrated that not only atrial, but also ventricular cardiomyocytes can secrete C-type natriuretic peptide (CNP). It is through this string of discoveries and others that it became recognized that the heart has a vital endocrine hormonal function; it synthesizes, stores, and releases a group of peptides with natriuretic and hypotensive properties that intervene in the short- and long-term regulation of water, electrolyte balance, and blood pressure.

During the same period, Dr. J.C. Armour, from the University of Montreal introduced the concept that the heart also has its own intrinsic cardiac nervous system.4 It has been observed that the heart beats in an embryo before it has any connection to the brain. It will continue to beat after it has been removed for transplant and all external nerves have been severed. The intrinsic cardiac nervous system that causes such activity is composed of approximately 40,000 neurons clustered together in cardiac ganglia, the heart’s own “little brain.” Research has demonstrated that these ganglia exchange physiologically relevant information with other organs and systems in the body. This knowledge has contributed to the emerging view of the heart as a complex, self-organized nervous system that maintains a continuous two-way dialogue with the brain and the rest of the body.

Over the past quarter century, the discovery of intrinsic cardiac natriuretic hormones and the existence and role of cardiac neurons has necessitated a fundamental revision of the concept of heart function. The heart should no longer be considered only as a pump, but rather as a multi-faceted, multi-functional and interactive organ that is integral to the complex network of integrated systems in the human body.