The Mediterranean Diet for Heart and Brain Health

It’s well known that diet, exercise and overall lifestyle impact cardiovascular health, but with so much conflicting dietary information bombarding patients, it can be challenging for them to know which diet to choose. 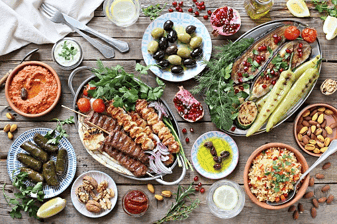 According to a recent study published in Stroke — a randomized controlled trial of more than 1,000 patients with CHD  — the Mediterranean diet is more effective than a low-fat diet when it comes to preventing atherosclerosis and Coronary Heart Disease (CHD).

What is the Mediterranean Diet?

In the United States, this diet has been on the radar since the 1950s when it was discovered that those in the Mediterranean had lower incidences of heart disease. Although health practitioners have been recommending this diet, among other diets, to prevent heart attack and stroke, the new study gives the Mediterranean diet even more credibility.

Is the Mediterranean Diet Good for the Brain?

National Geographic fellow Dan Buettner brought the Mediterranean diet further into the mainstream spotlight with the 2008 publication of his book, Blue Zones. He and his team identified five areas of the world with the highest percentage of centenarians that had not only managed to live longer, but thrive. They had lower incidences of diseases such as Alzheimer Disease (AD) and diabetes. Two of the original five “blue zones” are located in the Mediterranean.

Studies on the Mediterranean diet’s impact on cognitive health has produced mixed results, yet in addition to anecdotal evidence supporting the cognitive benefits of such a diet, a study published recently in Neurology further supports this claim. The study, which looked at the diet’s effect on AD biomarkers and brain volume, concluded that the diet is a “protective lifestyle factor against AD-related neurodegeneration and memory impairment.”

The Big Picture: What Patients Need to Know

Although Buettner spends plenty of time discussing diet in his book — and published a subsequent book with recipes from these regions — he also identifies lifestyle patterns common to these zones. This includes putting family first, engaging in natural exercise such as gardening, and having a strong social network.

Whether educating patients on preventing disease or recovering from it post surgery, emphasize a multi-pronged approach that includes dietary changes, stress reduction, and increasing natural movement. Then, give them resources to help them make these changes, such as a health coach who can break down the information into steps they can manage and hold them accountable along the way.