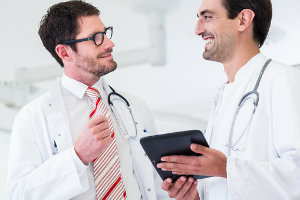 Becoming more productive as a physician can often feel like trying to tame a wild horse: Just when you think you have things under control, you get bucked off the ride. Maybe you struggle with managing an overwhelming number of responsibilities, or have challenges committing to your calendar. Whatever the case, we’ve outlined some ways to dust yourself off and get back in the saddle.

1. Mastering the efficiency of the EHR system

Electronic Health Records (EHRs) have gotten a bad rap in the past few years. There have been numerous complaints about EHRs being responsible for a decrease in productivity. They aren’t user-friendly and tend to hinder individual clinical workflow practices. But physicians like Josh Bock, MD, Managing Partner at AFC Physical Medicine and Chiropractic Centers, push back against this claim. “If physicians are honest with themselves, they would find that the time could be similar—if not shortened — in an electronic environment,” Bock says. In fact, a recent national estimate found that primary care physicians with an EHR collectively spent an extra 34,000 hours of face-time with patients per week.

The key to mastering EHRs is reframing how you look at them: all the tasks you were doing with paper, you’re now doing electronically. This may seem simplistic, but many physicians view using EHRs as an “extra task” — when it actually just takes time to integrate a new system. Some practical steps you can take to quicken your efficiency include asking your EHR vendor to provide in-depth training for your staff, delegating initial lab reviews to medical assistants, or using templates to recommend standard procedures.

Saying “no” can be a challenging prospect for many physicians, particularly because they want to control the outcomes of every situation. If you find you need to be at the helm of every ship in your practice, you’ll eventually end up crashing into the shore. Learn to delegate responsibilities so you don’t end up doing tasks like watering the plants.

Equally important is not capitulating to outside demands. Set your schedule and stick to it (outside of emergencies of course)! If a portion of your day is blocked off for catching up on patient phone calls, don’t let a sales rep deter you with the latest conference news. Respect your calendar and ask others to do the same. You’ll find your productivity levels will rise immensely as you say no to unnecessary distractions.

3. Expanding the role of your medical assistants

The North Shore Physicians Group in Massachusetts estimated its physicians were each responsible for 7 hours of patient care and 14 hours of administrative work a day. While this may sound productive, the number of hours you put into working doesn’t actually equal increased output — and can quickly lead to physician burnout.

Tightening the reins on your productivity can seem like a slippery prospect. Look for ways to maximize efficiency with new systems, say “no” to distractions, and innovate with staff responsibilities. Just like training a stallion, these tricks and tips can help you hit an even stride.