Delos Marshall "Toby" Cosgrove was born in 1940 in Watertown, New York. His father was a lawyer and his mother, a flamboyant “Auntie Mame”-type character. Both 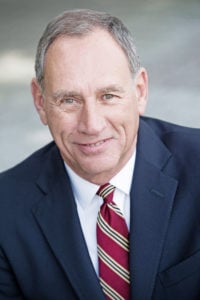 imbued in their son the need to contribute. After seeing photographs of surgery in a neighbor’s cottage on Lake Ontario, an 8-year-old Cosgrove decided that he wanted to become a surgeon.

Determination and perseverance got Cosgrove through his undergraduate years at Massachusetts’ Williams College and the University of Virginia’s medical school. He later learned that he is dyslexic. In 1968 after one year of surgical residency, Cosgrove joined the Air Force during the height of the Vietnam War and found himself in Da Nang in charge of a 100-bed Air Force Casualty Staging Flight where they would see about 100 patients a day before they were shipped out. He was awarded the Bronze Star for his work helping to evacuate more than 22,000 casualties during the war.

Brimming with confidence, Cosgrove returned to the states and completed his internship and residency requirements at Massachusetts General Hospital, the Boston Children’s Hospital and Brook General Hospital in London. While at Boston Children’s, he wrote a book along with Drs. Aldo Casteñeda and Robert Slade on the management of infants and children during cardiac surgery — the first of its kind. Then, in 1975, a call came inviting him to join the Cleveland Clinic’s cardiac surgery team.

Cosgrove knew immediately that the Cleveland Clinic was where he belonged. In 1989, he was appointed chairman of the Clinic’s Department of Thoracic and Cardiovascular Surgery. Over the course of his surgical career, Dr. Cosgrove performed over 20,000 surgeries. In 2004, he changed gears entirely to become the Cleveland Clinic’s president and chief executive. In 2017, he announced he was stepping down as CEO to a more advisory role.

As an administrator, he has championed improving health care by preventive measures of reducing smoking and obesity. The Clinic stopped hiring smokers and once the anti-smoking campaign was rolled out to the community at large, smoking rates dropped from 28% to 15%.

Cosgrove’s campaign to lower obesity took a two-pronged approach, offering more nutritious food to patients and staff and encouraging exercise. “The nice part is I’m not running for office, so I can do the things that I’m pretty sure are the right things to do,” commented Cosgrove in a 2011 interview for the American Association of Thoracic Surgery 100th anniversary book, In the Words of the Presidents.