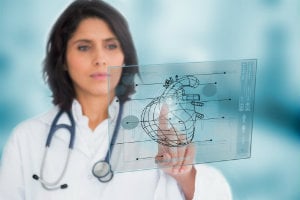 In a 2015 study that included 345 CABG patients who had 982 intraoperative graft flow measurements, Copenhagen University surgeons sought to determine if transit-time flow measurement can be used to predict graft patency at one year post-op.

Graft flow measurements were made on 357 single internal mammary artery (IMA) grafts; 218 single vein grafts; 65 single radial artery grafts; 41 Y-graft anastomoses. Sequential anastomoses were performed with 238 vein grafts, 23 IMA grafts and 80 radial artery grafts. Angiography was performed in all patients at one year post surgery. Graft failure was defined as more than 50% stenosis including the “string sign.” The risk of graft failure after one year, based on graft vessel type, anastomotic configuration, and coronary artery size, was analyzed with logistic regression analysis.

Twelve percent of the 985 anastomoses measured demonstrated signs of graft failure at one year. Patency was 94% for IMA grafts, and 83% for vein and radial arterial grafts at one year.

Based on their analyses, the clinicians concluded that transit-time ultrasound flow technology is a valuable instrument for intraoperative quality assessment of bypass grafts. It has good discriminative ability for assessing the risk of graft failure in certain graft types within the first year after CABG surgery.

They caution that the measured flow value in the graft should be evaluated with respect to the surgeon’s clinical judgment of the quality of the native coronary vessel, graft material and the surgical anastomosis. Furthermore, they corroborated that a flow value in an IMA graft of 20mL/min, as recommended by the European Guidelines, is a satisfactory minimum value. For single vein grafts the minimum acceptable flow value should be in the range of 40 mL/min to ensure patency.