In the early 1960s, the demand for dialysis outweighed its availability, which meant many patients with end-stage renal disease (ESRD) or chronic kidney disease were turned away from treatment.

After the 15-year-old daughter of a friend of Les Babb’s was denied dialysis treatment, 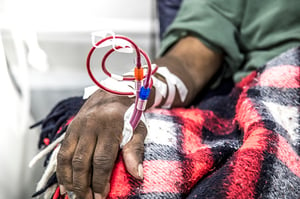 Babb, a professor of nuclear engineering at the University of Washington and Belding Schriber set to work developing a small home dialysis system. A few months later in London, Stanley Shaldon began using a similar machine to treat dialysis patients at home.

Since there was no government funding to pay for treatment in the ’60s, home hemodialysis became an affordable treatment option for patients.

That changed with the 1973 passage of Section 2991 of the Social Security Amendments, or the Medicare End-Stage Renal Disease Program, which made affordable dialysis treatment available to 90 percent of ESRD patients and affected home hemodialysis use.

Home hemodialysis use decreased after the passage of the Medicare End-Stage Renal Disease Program because:

The Evolution of Home Hemodialysis Technology

During its initial use in the ’60s, the technology needed for dialysis at home was cumbersome and usually required major alterations to the home. Since then, home hemodialysis technology has evolved to more patient- and home-friendly options. When a group of home hemodialysis patients and nephrologists were asked what changes they’d like to see in the technology, many had the same responses:

Some observational studies suggest home hemodialysis can provide clinical benefits thanks to its flexible treatment schedule. These benefits include better blood pressure control, improved phosphate levels, a decrease in sleep apnea, and improved cardiac function among others.

Which Patients are Good Candidates for Home Hemodialysis?

According to the American Nephrology Nurses Association, these patients make good candidates for home hemodialysis: