Cardiovascular Disease in Patients with CKD – 2018

Cardiovascular disease (CVD) remains the leading cause of death in the United States and most other developed countries. It accounts for approximately 39 percent of deaths among those on dialysis. Among patients with chronic kidney disease (CKD), death from 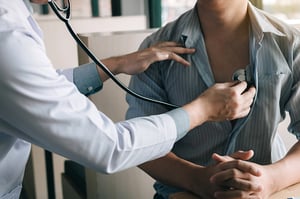 CVD is far more common than progression to end-stage renal disease (ESRD). CKD has been identified as an independent risk factor for CVD, and arguably should be recognized as a coronary disease risk equivalent, similar to diabetes mellitus (DM). The complex relationship between CVD and kidney disease is thought to be due to shared traditional risk factors, such as DM, hypertension (HTN), physical inactivity, left ventricular hypertrophy, smoking, family history and abnormal lipid levels in the blood.