Chronic kidney disease (CKD) is is a major 21st century medical challenge. More than 650,000 patients per year in the United States and an estimated 2 million patients worldwide are affected by end stage renal disease (ESRD). These patients will require 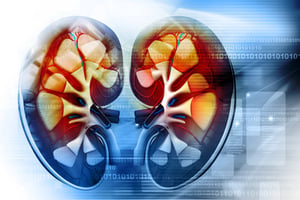 renal replacement therapy to survive. The rapid rise of common risk factors such as diabetes, hypertension and obesity, especially among the poor in developing nations, will result in even greater and additional burdens on medical communities.

Although CKD is classified into five stages, renal insufficiency is limited to stages 3 - 5, with a glomerular filtration rate (GFR) below 60 ml/min per 1.73 m2 for three months or more.

The stages of CKD are as follows:

The number of patients starting renal replacement therapy per year has increased exponentially. The significant improvements in the treatment of cardiac diseases and cancer and in survival over the past decades has allowed many patients to survive in the more advanced stages of CKD and require renal replacement therapy. Moreover, potentially nephrotoxic drugs, such as non-steroidal anti-inflammatory drugs, antibiotics and chemotherapy agents are used more commonly and may lead to increased numbers of CKD.

Of the 547,982 prevalent ESRD patients in the United States in 2008, 70 percent were being treated by dialysis while 30 percent had a functioning kidney transplant. Diabetes accounts for 44% of incident ESRD while hypertension accounts for 27.9%. The incidence of type 2 diabetes doubled from the 1970s to the 1990s. Therefore, global efforts should be continued to prevent and treat acute and especially chronic conditions that could potentially lead to ESRD, most notably, diabetes and hypertension.

There are disparities in the incidence and prevalence of ESRD within and between developed countries that reflect racial and ethnic diversities. For instance, the incidence is higher among African and Native Americans and aboriginal people of Australia and New Zealand than their Caucasian counterparts. In the United States, minority and low-income ESRD patients are disproportionately represented. Compared to whites: