Mary Christiensen moved to the senior citizen’s residence after her husband died. The move had been traumatic. Mary felt uprooted, having left behind friends and the home 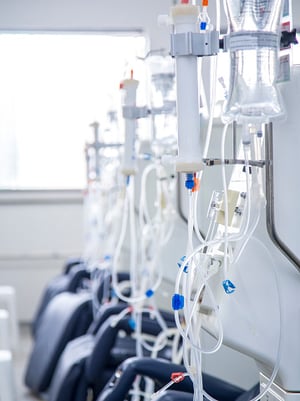 she and her husband had shared for 42 years. One constant remained from her old life. Three times a week she would be driven to a clinic for hemodialysis, as she had for the seven years when her kidneys failed. Even though the treatments drained her, she welcomed them because she would then feel better for a day or so.

Mary’s stoicism was admired by many of her fellow residents. She put on a brave front around her daughter, her caregivers and friends. It was only with her chaplain that she confided her terror that, at any given moment, her vascular access would fail. It had once before. But Mary was lucky that time and another access could be created.

Mary’s fear was justified. One day she had to be rushed from the dialysis unit to the hospital for emergency surgery. The first surgery wasn’t successful. Another surgery followed. She had a reprieve, a few more months to live. But it was only months. In less than a year, Mary was again in the hospital without a patent access. That time she succumbed to the disease that had plagued her for the past seven years.

Mary fell victim to a medical system that did not put the patient first! The HD03 technology that would have provided monthly vascular access flow surveillance to predict stenosis formation was available for the clinic’s use. Monetary concerns inhibited its implementation, a decision which might have led to Mary’s life premature death.