There are 20 million veterans in the United States. Approximately nine million are enrolled in the Veterans Health Administration (VHA). About six million of these veterans receive their healthcare in one of the VHA facilities. Among the more than 6,000 dialysis units nationwide, there are approximately 70 VHA dialysis centers. Each year, approximately 13,000 veterans transition to renal replacement therapy, mostly for 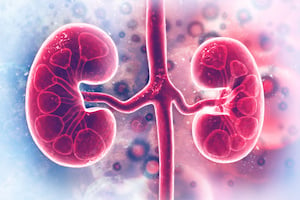 Data suggest that ESRD is 29 percent to 38 percent more likely to occur among veterans than in the general U.S. population. Between 2007 and 2015, a total of 102,477 veterans transitioned to ESRD. Their mean age was 70.2 ±12 years and included 24 percent Black patients and 7 percent Hispanic patients. Compared to all USRDS patients who transitioned to ESRD during the same period, U.S. veteran patients were older, more likely to be non-Hispanic and White, and more likely to have reported cardiovascular or pulmonary comorbidity to the Centers for Medicare & Medicaid Services (CMS) at the time of transition. They were also more likely to have pre-transition nephrology care or have an arteriovenous (AV) fistula as their initial access type.