How Dialysis Nurses can Help Hemodialysis Patients with Self Cannulation

As a hemodialysis nurse, you have probably performed cannulation on hundreds of hemodialysis patients. But, did you know researchers have noted that the ideal person to 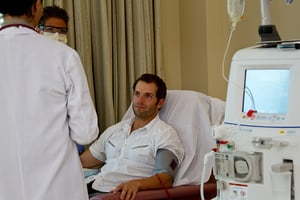 do the procedure is the patient? That’s because the patient is always there for his or her hemodialysis session.

Despite the fact many patients may not have had any medical training, most can quickly achieve expert-level skill with self-cannulation, which not only makes the patient more active in his or her care and reduces the risk for complications, it also frees nursing staff up to do other pre-dialysis and dialysis tasks.

In addition to making the patient more involved in her or her care, self-cannulation can increase the patient’s confidence and give them a greater sense of control. However, many patients feel uneasy about the procedure.

While the benefits of self-cannulation for hemodialysis are plenty, many patients struggle with the idea of inserting a needle into their bodies. The patient’s desire to self-cannulate appears to decline once they receive their first in-center dialysis treatment.

Sixty-three percent of patients who had not yet undergone dialysis reported they could self-cannulate on their own or with help, but after receiving their first treatment in the hospital, 53 percent of patients said they didn’t think they could do the procedure. In addition to a fear of needles, patients cited fear of infection, excessive bleeding, pain and watching the needle be inserted.

In the above study, the patients’ perception of self-cannulation and their ability to do it was changed once they received hemodialysis in-center. Study authors propose that education of patients occur before they receive their first hemodialysis treatment.

However, even if you or your patient has previously received hemodialysis in-center or is struggling with the idea of self-cannulation, there are steps you can take to reduce fears and self-cannulate successfully. These include:

Establishing control: Control can take three forms: mental, physical and lifestyle, according to study authors. Mental control, according to patients from the study, involves not allowing a fear of needles or cannulation to grow in your mind.

“When a needle goes in, it's not the needle you're scared of, it's the thought of the needle going in that scares you. It's the feelings we sort of make. It's your mind playing tricks on you,” said one patient.

Patients also want the physical control of inserting the needles themselves and to have greater control over their lifestyles through home hemodialysis.

Building confidence: This involves creating and maintaining confidence through training and support from members of the dialysis care team. Many patients reported their nursing and care team provided them with the confidence they needed to begin home hemodialysis. Confidence can also come from patient education. One patient reported his confidence was established after he read literature on self-cannulation and taught himself to do the procedure.

Normalization: For some patients, the success of self-cannulation came after they accepted that the procedure was part of their identity and had become the norm.

In addition to the above points, you can encourage your patients to:

Successful self-cannulation can improve patient outcomes and make them feel more in control of their disease and treatment. You can play an important role in teaching your patients this technique by listening to and helping them address their concerns.