The division, which is being sold to UnitedHealth Group, agreed to pay the sum to settle 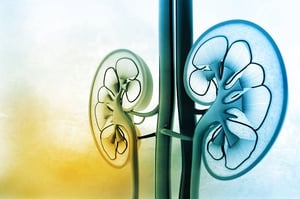 claims it provided inaccurate information on patients enrolled in Medicare Advantage plans, which led to overpayment from Medicare.

A study found significant improvements in the one-year survival rates of patients with end stage renal disease who initiated dialysis after the expansion of Medicare with the Affordable Care Act. Researchers theorize that, because the expansion eliminated the $150 per week payments, centers saw better adherence to treatment.

Dialysis patients who received a high-dose flu vaccine between 2016-2017 were hospitalized less frequently than those who did not, according to a new study. However, researchers note these results should not be considered definitive because vaccine type was not randomized.

The summit, hosted by the Congressional Kidney Care Caucus, included an announcement that the American Society of Nephrology and HHS will commit $2,625,000 to one of the initiatives—a prize competition that challenges the public to create better treatment options for kidney failure.