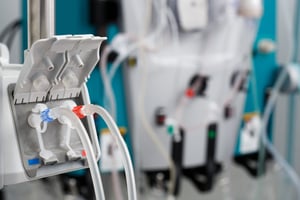 DaVita reported income for Q1 of 2017 was 21 percent less than the same time last year. The drop in income was attributed to lower ACA enrollment among dialysis patients, an increase in wages for clinical staff and adjusted operating income for pharmacy operations.

Dr. George Arnoff will serve as VP Clinical Affairs for the company’s hemodialysis operations and also will be a member of the Office of the Chief Medical Officer on DaVita Kidney Care’s physician leadership team. Previously, Arnoff served as the chief medical officer of Renal Ventures Management, which DaVita acquired in May.

A study in Kidney International found that hemodialysis patients had a higher risk of death — regardless of the timing — if they were readmitted within one year of their discharge date.

Many nephrology fellows rate the quality of their teaching as good or excellent, with second-year fellows saying they feel fully equipped to enter independent practice. Fellows reported using UpToDate, JASN/CJASN, and NephSAP as frequent resources.

Researchers found that CKD patients with at least one preventable hospital-acquired infection faced increased risk of death, risk of readmission or incremental length of stays.