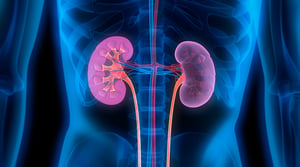 geographies and customer channels, and the company will immediately add the product to existing domestic and international channels focused on both acute and non-acute care settings.”

In order to meet the requirements included in the Advancing American Kidney Health order, suppliers of home dialysis supplies plan to ramp up production.

Data from Kidney Week suggested that diets with higher protein intake were associated with a higher risk of all-cause mortality and ESRD in CKD patients. Researchers also found that a decline in dietary protein levels led to a progressive loss of kidney function.

Can we add in this ““Since higher dietary protein intake was associated with higher mortality, nephrologists should recommend restricted intakes for patients with CKD stages 3 to 5,” Abu Farsak told Healio Nephrology in an on-site interview. He recommended a daily intake of less than 0.8 gm/kg of body weight. – by Melissa J. Webb

Researchers found that compared to the 50 U.S. states, death rates for dialysis patients in the U.S. territories were lower for whites, similar for blacks and higher for Hispanics and Asians. Researchers note that “Further studies are needed to better understand the influence of issues such as genetic factors, insurance coverage, health infrastructure, health beliefs and behaviors, social networks, and other subtleties in the United States territories that may add critical insights to our observations.”

Monthly blood testing for hemodialysis patients is not associated with a lower risk of death, hyperkalemia, cardiovascular events or hospitalization, compared to testing every six weeks, according to researchers.