RenalytixAI’s device, known as the KidneyIntelX, is the first device of its kind to receive 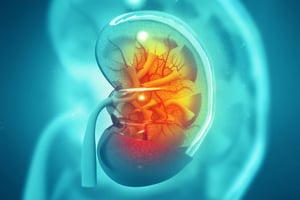 the Breakthrough Device designation from the U.S. Food and Drug Administration. The device is meant to diagnose and improve the clinical management of patients with Type 2 diabetes and quickly progressing kidney disease.

As chronic kidney disease (CKD) advances, so do anemia risks, new findings suggest. Researchers followed 55,940 patients with newly progressed CKD in Stages 3 to 5 and found within one year that anemia developed in 36 percent of patients with CKD Stage 3a. Within five years, the number of patients with anemia increased to 62 percent.

Researchers found those patients who were made redundant prior to hemodialysis initiation was associated with mortality. Those patients who continued to work, however, had a lower death rate and were more likely to receive a transplant. Study authors cautioned there needs to be care taken in the interpretation of the data because it’s not clear whether the survival benefit was due to the positive effect of employment or if unemployed patients died at a faster rate because they had been sicker before hemodialysis.

A study from Johns Hopkins found 1 in 5 U.S. surgeons continue to use the AVG procedure to create vascular accesses despite the fact that creating an arteriovenous fistula (AVF) procedure proves safer. The study found those surgeons who performed higher numbers of AVG procedures were more experienced, were located in a metropolitan settings and specialized in vascular surgery rather than general surgery.