One-Third of ESRD Patients with CVD Are Patient Readmissions

Patients receiving hemodialysis are at high risk for morbidity and mortality related to cardiovascular (CV) events. In fact, cardiovascular disease (CVD) is 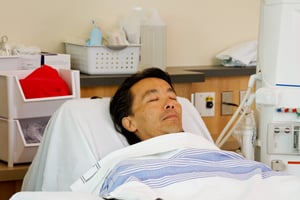 responsible for two out of every five deaths of dialysis patients. Hospitalization for CVD is common among hemodialysis patients and causes a substantial burden not only on themselves, but also on their providers, payers and society.

The group, led by David Gilbertson, PhD, conducted a retrospective analysis of 83,783 Medicare patients receiving dialysis who had 142,210 hospitalizations during 2012-2013 to discover how many of the live discharge hospitalizations were attributed to CVD. They then calculated the rates for patient readmissions for all causes; those readmitted for a CVD-related event; those readmitted for a non-CVD-related event; and finally, the number of dialysis patients who died within the ensuing 30 days following a hospitalization.

Their analysis revealed that 4.5 percent of these patients would die within 30 days. CVD was the cause of slightly over half of these deaths. The mean age of patients at the time of the first CVD hospitalization was 64.9 ± 14.1 years. Thirty-four percent of patients discharged were readmitted within 30 days, with almost half being readmitted within the first ten days. Less than half of these patient readmissions were CVD related.

From their analysis, the research group concluded that about one in three CVD hospitalizations resulted in the dialysis patient being readmitted within 30 days. Nearly one in 20 dialysis patients who had been hospitalized died within 30 days, and that risk for death was higher in white than in black patients despite there being no difference in their respective risk for readmission.