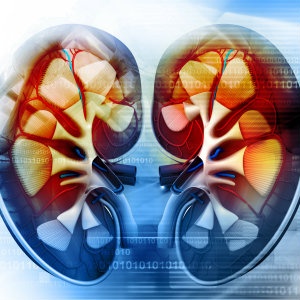 Before 1960, end-stage kidney disease was always fatal. According to a University of Washington research study: “Use of the artificial kidney—or kidney dialysis—to cleanse the blood of toxic products meant that an artery and a vein were damaged every time the patient was hooked up to the machine. A patient could receive perhaps five to seven treatments before doctors would literally run out of places to connect the machine to the patient and the patient would ultimately succumb to the disease.”

However, after a young researcher, Belding Scribner, joined the University of Washington faculty in 1951, he became intrigued by the new material Teflon, which would not react with human tissue, as it might be used as an AV shunt for repeated attachment to the artificial kidney. Scribner developed the U-shaped tube shunt in collaboration with Wayne Quinton, a biomedical instrument builder at the university.

The shunt was designed so that it could be permanently installed between an artery and a vein in the arm so that the kidney machine could be attached as often as necessary. When not in use for dialysis, the U-shaped portion of the shunt would remain as an extension of the circulatory system routing the blood from the artery back into the vein. When it was time for dialysis, the U-shaped portion could be disconnected and the artery and vein extensions could be connected to the artificial kidney. No new incisions had to be made, no blood vessels destroyed.

The revolutionary Scribner Shunt was implanted for the first time in the arm of Clyde Shields, a Boeing machinist, on March 9, 1960. An era of successful treatment for chronic end-stage kidney was born.