Transition of Care for Persons with CKD - 2018 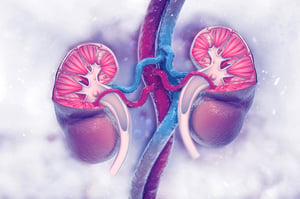 the transition of care to renal replacement therapy (dialysis or transplantation) in patients with very-late-stage (advanced) non-dialysis dependent CKD. These are often persons with an estimated glomerular filtration rate (eGFR) <25 mL/min/1.73m2.

In a special USRDS study, the most recent Veterans Health Administration (VHA) and Kaiser Permanente Southern California (KP-SC) cohorts of incident ESRD patients were analyzed to test the hypotheses that a pre-ESRD, data-driven, personalized approach to the transition of care into ESRD in very-late-stage, non-dialysis-dependent CKD is associated with more favorable outcomes, particularly if the decision is based on pre-ESRD factors such as clinical and laboratory variables, including CKD progression rate, comorbid conditions during the prelude period and demographics.

In the 2016 Annual Data Report, data on approximately 85,000 incident ESRD veterans who transitioned to ESRD over 6.5 years (from 2007-2014) across the entire nation was presented. The following year, similar data was presented on more than 100,000 incident ESRD veterans who transitioned (from 2007-2015). In the 2018 Annual Data Report, additional data on these 100,000 veterans, including comparisons with the entire USRDS cohort that transitioned over that period, seasonal trends, and variations across the United States were presented. Also included was data on the racially and ethnically diverse Kaiser-Permanente Southern California member population who transitioned to ESRD over 10 years between from 2007-2016. Highlights include: