On November 6th California voters went to the polls and said no to ballot initiative Proposition 8, known as the “Fair Pricing for Dialysis Act” that would have capped dialysis 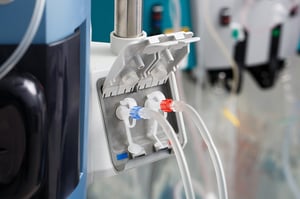 providers’ such as Davita Dialysis, Fresenius Medical Care and U.S. Renal Care, profits at 15 percent above what they spend on “direct patient care services costs.” It would have also required them to rebate the leftover revenue to insurance companies paying for patient procedures.

Approximately 80,000 persons with end-stage renal disease (ESRD) receive dialysis at the California’s 588 clinics. Although the procedure is also performed at homes and in hospitals, most dialysis patients rely on standalone specialty clinics run by Davita, Fresenius, and U.S. Renal Care. In California, doctors do not have to be on site at clinics at all times so they are run by dialysis nurses and technicians. In California, 90 percent of dialysis patients pay for the procedure with Medicare or Medi-CAL (at approximately $260 per treatment), while private insurers frequently reimburse the clinics at 10 times of more that amount.

Supporters of Prop. 8 publicized the industry’s high profit margins and claimed a cap would force large providers to prioritize the quality of care over their bottom line, encouraging reinvestment back into clinics. Opponents said the initiative would run the providers out of business and spark a crisis as the number of patients in need of dialysis continues to grow.