The National Kidney Foundation (NKF) Kidney Disease Outcomes Quality Initiative (KDOQI) guidelines call for monitoring and surveillance of vascular accesses to proactively identify access complications so that they can be resolved early. Moreover, the KDOQI Guidelines recommend that access blood flow assessment be performed within the first 1.5 hours after the beginning of a dialysis treatment. In a busy high volume dialysis clinic, it might be logistically impossible to perform surveillance of all patients within the first 1.5 hour of dialysis. So the question surfaces, “Does it really matter when surveillance takes place?” 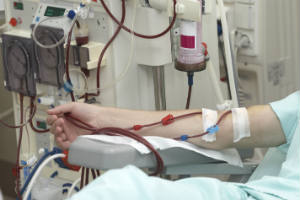 A recent case report in the September-October 2017 issue of the Nephrology Nursing Journal indicates that it does matter. When a case of an 82-year-old male who was receiving hemodialysis each Monday, Wednesday and Friday, was reviewed, it was discovered that most of the patient’s low access flood flow measurements, ranging from 790 to 910 mL/min, were measured toward the end of a dialysis session. On the other hand, all the higher access blood flow measurements, ranging from 1,100 to 1,420 mL/min, were measured during the first hour of the hemodialysis session. Because some the lower measurements represented a 25% decrease from the higher measurements and were below 1,000 mL/min, the patient was sent for a fistulogram, per KDOQI guideline recommendations, only to discover that there was no problem with the access.

Lower access flows measured later in a dialysis session correlate with the results of a 1999 Vanderbilt University Medical Center study that reported that there was a statistically significant 7% decrease when measurements were performed 150 minutes after dialysis was initiated in contrast to within 30 minutes of the onset of hemodialysis.

Moreover, the Tampa VA Hospital group found that access blood flow measurements were higher on days when there was a higher interdialytic weight gain, usually on the Mondays following a weekend break. Increased blood volume correlated with the higher readings.

To minimize such variances in measurements, the Tampa group implemented changes in when access flow measurements were performed in their clinic. All access blood flow measurements were to be performed within the first one hour and one-half of a dialysis treatment. They also stopped measuring access flow on the days after a weekend break when a patient’s blood volume was higher. By changing and standardizing these two procedures, the clinic’s average variance in measurements dropped from a baseline of 31.3% to 12.75% after the first month and stayed at that level in subsequent months.

Therefore, to have consistently reliable access flow measurements, follow the KDOQI guidelines that recommend measurements be performed within the first 1.5 hours of dialysis.