It was the launch of Sputnik that cemented Dr. George Pantalos’s interest in space exploration. His father, a member of the Air Corps during World War II, was able to pick up the satellite on shortwave radio as it passed over Columbus, Ohio.

“I was fascinated by the idea of flying and exploring space,” Dr. Pantalos explained. “Then as I grew older, I built and flew model rockets and I figured that getting a Ph.D. in aerospace engineering was my ticket to Mars.” 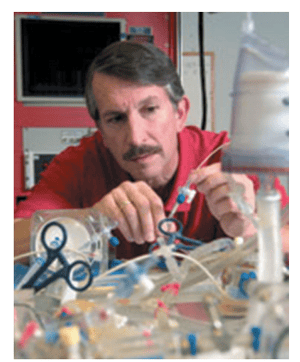 But it was a chance assignment for the school newspaper that modified his career trajectory toward biomedical engineering. An honors biology class at his high school was studying organ transplantation and had attempted a heart transplant on a bullfrog. Their first experiment failed, but for the second, they asked Dr. Pantalos, a photographer for the school newspaper and yearbook, to help them document their efforts through photos.

“I was able to go to class for the next several weeks before the next attempted transplant,” he said. “It became very obvious to me that several of the problems they had, like how do you connect small blood vessels like the donor aorta to the recipient aorta? How do you keep slimy frogs from slipping off of the operating room table? They all had engineering solutions. That got me turned on to the idea of using engineering to address medical challenges.”

“I started doing animal research as an undergraduate student and I learned things like di-dilution as a cardiac output determination technique then,” he said.

After completing his graduate and postgraduate studies, Dr. Pantalos began working as a faculty member at the University of Utah where he worked with its artificial heart program. It was there that he was introduced to Transonic’s flowprobes and has since used them to measure flow in his work.

“They have helped me with a lot of my different special research,” Pantalos said. “I do a lot of animal work, mostly large animal. I do a lot of physical simulation of the circulatory system or mock circulations as they're called. In fact, I and my project team put together one of the circulation simulators that actually flew twice on the Space Shuttle.”

Using a Flowprobe in Space

Dr. Pantalos and his team at the University of Louisville are working on an astro surgery project that would allow astronauts to perform surgery and resuscitation on expeditionary space flights.

“If you need to do a rapid fluid resuscitation of an astronaut for some reason, how would you get a sufficient amount of intravenous fluid into them? My students and I starting last summer, and then continuing this summer, did a project where we looked at the infusion flow rate from a one-liter bag of fluid and we were able to simulate the hydrostatic pressure head for one G and then Martian gravity and lunar gravity and then zero gravity,” he explained.

To allow astronauts to be able to perform simple surgical tasks on a space flight, Dr. Pantalos and his team are looking at fluid management, surgical tool design, technique and proper training for astronauts.

“We've got some good ideas on how to do visualization and some ideas on how to do cauterization, but we haven't implemented it yet,” he said. “In order to measure the flow, we have been using Transonic’s clamp-on flowprobe. In developing other aspects of the system, when we've been doing flights on the zero-G airplane, we've been using a Transonic clamp-on flowprobe to make sure that we're getting adequate flow rates, in this case with the fluid that we're using, filling a container containment dome over at the surgical site.”

In fact, Transonic’s flowprobes have made the journey into space several times to assist with Dr. Pantalos’s research. But in order to meet the shuttle’s weight requirements, the OEM team at Transonic had to create something that would allow the flowprobe and the contents of the flowmeter box to be used without the box.

“The crew and Transonic helped us figure out exactly what electronics we would need and how to incorporate them into the experiment,” he said.

When Dr. Pantalos and his team encountered a problem during a Space Shuttle experiment in 1997, the Transonic team was again there to lend a hand.

“We encountered a problem that we hadn't encountered during all of our testing when we were in Salt Lake City,” he said. “For some reason, there was an interference from other electronics in the experiment with the electronics on the flow board and we kept losing our flow signal.”

Dr. Pantalos picked up the phone on a Sunday afternoon and called Transonic founder Cor Drost for assistance.

“He connected us with some of the other engineers. They came up with a way to work around the problem of the flow signal getting turned off so that we could always count on having a flow signal. They were very responsive and we got the job done and it flew and we got the flow data,” he said.