It's Not Just Blood That Flows Through Our Probes 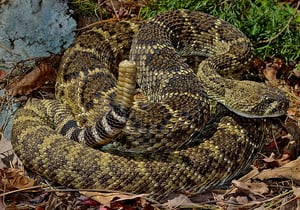 As one of the application specialists working at Transonic, the exciting part of my job is helping to develop new applications. However, being one of the pioneering companies in the cardiovascular space, with more than 35 years’ experience, truly novel applications can be hard to come by. With this said, researchers are always pushing the boundaries and today I would like to review some exciting research that can happen when you think outside of the box.

When rattlesnakes bite, they can control whether to release any venom. Over 20 years ago, the question was asked: how much control do rattlesnakes have over their venom release, and how/when does that venom flow during a strike?

Dr. Bruce Young of Lafayette College explored these questions in “Venom flow in rattlesnakes: mechanics and metering” published in The Journal of Experimental Biology, 2001. He came to us all those years ago with his research question and we collaborated to enable the measurement of venom flow in a conscious rattlesnake.

Using sterile surgical techniques four diamondback rattlesnakes were chronically instrumented by implanting a 1 mm Transonic perivascular flow probe unilaterally onto the primary venom duct to measure venom flow during defensive and predatory strikes. The flow probe cable coursed subcutaneously along the dorsolateral margin of the head and neck, then extended 5cm through the scalation on the dorsal midline of the neck. Venom flow measurements during strikes were synchronized with high-speed video recording to determine how the flow of venom compared to the timing and duration of the strike penetration. The high resolution 1 mm flow probe (usually used to measure rat renal blood flow) recorded the instantaneous flow of venom for interval durations of 113.2 to 228.5 milliseconds dependent on whether the strike was predatory or defensive on the rodent. Mean venom volume flow rates (0.133 ± 0.028 ml/s) and venom volume were reduced for predatory strikes compared with mean venom flow rates of defensive strikes (0.625 ± 0.225 ml/s). A total of sixty strikes were measured providing new insights into the mechanics of snake venom flows.
The results were fascinating:

Well neither did we, but now we all do! That is the beauty of research and exploring the unknown. After this first study, new studies followed on mechanistical forces driving snake venom ejection. Dr. Young’s work doesn’t stop with venomous rattlesnakes either. He is also working with other interesting species such as American alligators and viper boas.

Together with our customers we find creative solutions to collect the data they require to answer their research questions. As I mentioned earlier, this is one of the more rewarding parts of my job. This fall I will be collaborating again with a research group to develop a new application and we are looking forward to sharing it here. Stay tuned!