Laminar flow occurs when blood moves in ordered, parallel layers through the arteries with no obstructions to agitate the layers. An example would be an easy flowing, straight river with a smooth, even bottom and shoreline. The middle of the river may 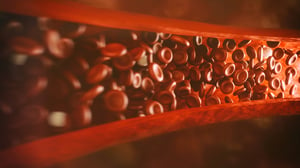 move at a faster speed than the banks, but all the water moves forward in straight paths. Laminar flow is characteristic of a healthy artery such as the femoral artery.

Turbulent flow describes a situation where the flow pathway becomes disorganized, layers break formation, and eddy currents are formed. Picture a river that is rapid and winding with variable depths and many obstructions. In arteries, turbulent blood flow can occur where atherosclerotic plaques narrow and vary the vessel lumen, where blood vessels branch or where aneurysms are encountered. The pronounced bend in the ascending aorta also creates turbulent flow. Turbulent flow generates sound, creating murmurs, carotid bruits and other audible diagnostic clues.

Reynolds number is an equation that calculates laminar versus turbulent flow. It is expressed as follows: