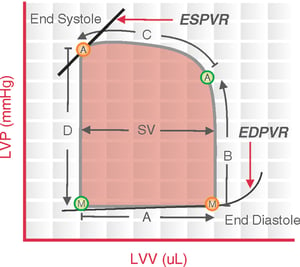 The simultaneous measurement of ventricular pressure and volume continues to play a pivotal role in a wide range of scientific studies. Today we will highlight a few of these recently published studies, each using our ADV500 PV System and its admittance technology.

For translational research, swine are very often used as the last step in preparation of patient studies. It is therefore extremely important that patient heart conditions can be mimicked in as much detail as possible in these animals. Reproducibility of an experimental model by fellow researchers not only assures reliable data but supports the ultimate goal of scientific progress. Hála et. al. recently published a study in Journal of Visualized Experiments in which they describe an easily reproducible tachycaridia-induced cardiomyopathy model of chronic heart failure. A single pacing lead was introduced transvenously to the apex of the right ventricle and fixated. 4-8 weeks of rapid pacing introduced severe heart failure, tachypnea, spontaneous sinus tachycardia and fatigue. These changes were all preserved after cessation of pacing. Pressure-volume loop derived data; maximum left ventricle pressure was reduced to 49 ± 32 mmHg. The measured volumes of the left ventricle were reflected in its dilation and systolic dysfunction. End diastolic volume was increased to 189 ± 59mL and end systolic volume to 139 ± 37 mL. Ejection fraction was calculated to be 25 ± 16%. This model represents a potent means to study decompensated dilated cardiomyopathy, hemodynamics of progressive chronic heart failure with low cardiac output, and effects of applied treatment. Hála et al., Tachycardia-induced Cardiomyopathy as a chronic heart failure model in Swine. J Vis Exp. 2018 Feb 17; (132):57030.

One of our earlier blogs discussed the importance of measuring functional parameters in the context of finding key proteins involved in (patho)physiological processes. Academia is in a unique position to perform fundamental research using tools like transgenic models to investigate causal relationships between a key protein and a (patho)physiological condition. The aim of the next study was to elucidate the physiologic and biochemical roles of p38γ MAPK in the heart, as p38γ MAPK is highly expressed in the myocardium, but very little is known about its role there. Heart function and structure of wild-type and p38γ knock-out mice were compared at baseline and after abdominal aortic banding, to introduce cardiac hypertrophy. Results showed that mice lacking p38γ are protected from abdominal aortic banding induced hypertrophy, as the left ventricle mass was significantly lower compared to that of wild-type animals. Subsequently, the contractile function (ejection fraction and end diastolic volume) measured by admittance pressure-volume technology was better preserved in knock-out mice compared to wild-type litter mates. This data, and more described in this study, suggests p38γ to be an important protein in the development and progression of pathologic cardiac hypertrophy after aortic banding in mice. Loonat et al. p38γ MAPK contributes to left ventricular remodeling after pathologic stress and disinhibits calpain through phosphorylation of calpastatin. FASEB J. 2019 Dec; 33 (12): 13131 -13144

As discussed in one of our earlier blogs, rodent models are often used because of the options to create transgenic models to investigate causal relationships of specific proteins and the availability of options to analyze tissue from a biochemical, histological and genetic point afterwards. Transverse aortic constriction (TAC) is an experimental blood pressure-overload model often used in mice to mimic heart failure in patients. Heart failure patients often present impairments in both ventricles. To optimize interpretation of experimental mouse studies Platt et al did a time course study to improve our understanding of the chronology of events in left and right ventricles following TAC in mice. Left ventricle pressure peaked at 4 weeks before progressively declining toward sham values by 18 weeks. Right ventricle pressure also peaked at 4 weeks, but unlike left ventricle pressure, plateaued from 9-18 weeks. Diastolic dysfunction was assessed using Tau calculated with Admittance based technology (Weiss equation).  It only increased at 18 weeks post TAC in the left ventricle. Right ventricle Tau elevated at 4 weeks and stayed elevated all through the study. Right ventricle hypertrophy/ fibrosis and pulmonary arterial remodeling confirmed a progressive right-sided pathology. The left ventricle demonstrated persistent concentric hypertrophy in both compensation and subsequent decompensation phase. In conclusion, pulmonary hypertension was secondary to left ventricle dysfunction, confirming TAC is a model of type II pulmonary hypertension in mice. Platt et al., Pathophysiological mapping of experimental heart failure; Left and Right Ventricular Remodeling in Transverse Aortic Constriction is Temporally, Kinetically and Structurally Distinct. Front. Physiol. 2018; 9: 472.

These publications represent different phases of translational research that all benefit from functional measurements, in this case the use of ventricular PV loops. Moving forward, we will bring you additional publication reviews that highlight various other technologies – such as vascular flow, pressure measurement and the use of telemetry – in various animal models.