Spring, The Beginning of New Life 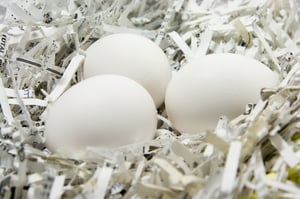 With Spring finally here, and the circle of life starting again in nature, I decided to dive into the Transonic archives and explore another less than obvious research application that we have been part of in the last 30 years. In addition to the fetal lamb model, chicken embryos have also been used as a model to investigate embryonic developments. In the spirit of Spring, I’m going to share some background information on why and how chicken embryos have been utilized in embryonic development research.

Chicken embryos develop independent of their mother, which has benefits when you want to study the cardiovascular consequences of hypoxia in the embryonic phase. At first glance, a chicken embryo does not have many similarities with the mammalian embryo, however, there are several parallels that the life science field has benefited from. The chorioallantoic artery blood flow (CABF) in avian species correlates well with umbilical blood flow in mammals. CABF, for instance, represents about 50% of the combined cardiac output, which is 500mL/kg/min, a value very similar to mammalian fetuses. The distribution of the cardiac output as well as the gas tensions are very comparable to that of the sheep fetus.

To begin, the model had to be established and the baseline values for CABF determined. But how do you study blood flow in a chicken embryo? Van Golde et al. studied CABF and heart rate in a hundred chick embryos from stage 34 to 43, which translates to days 9 to 16 of a 21-day incubation period. Eggs were opened at the air cell and placed in a small temperature and humidity-controlled plexiglass box with a continuous gas flow of a N2/O2 mixture (5 L/min). The chorioallantoic artery was identified near the fetal abdomen and a 0.5 mm Transonic V flow probe connected to a perivascular flow meter was placed around the artery to measure flow. The heart rate was derived from the pulsatile blood flow signal. Mean blood flow increased from 0.35 mL/min at stage 34 to 3.13 mL/min at stage 43 which correlated with an increase in body weight from 1.51 to 15 grams during the same period. Heart rate increased from 195 to 289 beats/min during this period.

In the mammalian fetus, cardiovascular changes occur in response to hypoxia, such as bradycardia, systemic hypertension, and changes in heart rate variability. With the baseline established, a follow-up study was conducted to examine the effect of hypoxia on CABF and heart rate in chick embryos. The V-shaped 0.5mm nanoprobe was again used to measure peak blood flow and blood flow acceleration in addition to measuring CABF and heart rate. Mean CABF and heart rate decreased significantly under hypoxic conditions and this response was more pronounced with the development of the embryo. Peak flow and CABF acceleration increased with incubation time and decreased during periods of hypoxia. During the recovery periods, heart rate returned to baseline levels, whereas mean CABF showed an overshoot. The initial decrease in mean CABF and heart rate was similar in both groups. The overall conclusion of these studies was that the cardiovascular response to hypoxia in chicken embryos is similar to the response in the mammalian fetus.

Our perivascular nanoprobes have gathered valuable flow data in a variety of different research applications. If you are developing a unique research model and believe that flow, pressure, or pressure-volume measurements will make your research more impactful, please contact us.

The treatment of spinal cord injury (SCI) has come a long way since the days of viewing these types of injuries as...
Read More

On January 25, 2022, we hosted our 12th live webinar as part of our client-lead webinar series. This series strives to...
Read More