A growing body of evidence supports the hypothesis that tachycardia in critical care patients with circulatory shock could be deleterious to the heart itself. 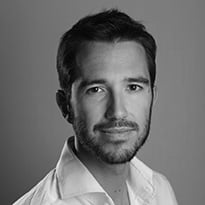 Today’s blog tells the story of Dr. Antoine Herpain’s research over the past couple of years in the light of existing literature and yet to be verified studies.

In his studies, he has finetuned a porcine model of severe septic shock, which mimics severe sepsis stages observed in the ICU, and has been used to investigate if and why it would be beneficial and protective to lower a patient’s heart rate during septic shock.

Around 10% of ICU submitted patients come with a septic shock, unfortunately around 35% of these patients do not survive. A study published in 2013, describes the increased survival rate of septic shock patients when they were treated with Esmolol, a traditional β-blocker. However, the findings in the study still need to be confirmed. Dr. Herpain’s work aims to investigate if Ivabradine would be a good alternative for Esmolol, as it lowers the heart rate by reducing the slow diastolic depolarization phase through blockage of the If channel current in the sinus node, without the inotropic and electrophysiological side effects of Esmolol treatment.

The porcine model Dr. Herpain has been working with is one of fecal peritonitis induced septic shock. Adolescent pigs of about 40 kg are first fully instrumented via a percutaneous catheterization approach as it is very important for the pre-load assessment to use a closed chest and intact pericardium approach when possible. Baseline measurements are performed after which the peritonitis is induced by intra-abdominal installation of autologous feces 3g/kg body weight). The criteria for shock are reached 6-8 hours later. The fluid resuscitation protocol, mimicking the clinical situation when patients are admitted in the ICU, is started for all animals when mean arterial pressure drops below 50mmHg. The goal of the resuscitation protocol is radial artery pulse pressure variation < 12%. After reaching a steady state for 30 minutes, data is collected and animals are randomized into the different groups (control, Esmolol or Ivabradine). For the Esmolol and Ivabradine groups the aim is a heart rate control at 80-90 beat/minute and a radial artery pulse pressure variation of < 12%. After reaching steady state and data collection, last step in the protocol was a fixed dose of nor-adrenaline again followed by measurement after steady state.

The data obtained by Dr. Herpain, confirm that Ivabradine achieves a clinically relevant and comparable to Esmolol level of heart rate control and this effect is maintained even under nor-adrenaline conditions. However, the hemodynamic worsening typical for the β-blocker treatment was not observed as the Ivabradine group showed significant stroke volume compensation that is not present in the β-blocker group. In line with these findings is the unaltered contractility, measured by the maximum change of pressure over time (dP/dtmax) in the Ivabradine group compared to control, while the β-blocker group demonstrated a significant reduction in contractility. As a result of this reduced contractility, cardiac output, oxygen delivery and tissue perfusion were significantly reduced in the β-blocker group, but preserved in the Ivabradine group. In short, Ivabradine treatment was able to reduce an excessive heart rate while preserving organ perfusion and is thus as effective, but safer compared to Esmolol to treat tachycardia in a porcine septic shock model.

In addition to discussing the results of his studies, he also touched on a point that has been a topic of discussion in the PV loop community for many years. As an expert on septic shock and long term ADV500 user, collecting pressure-volume loop data for many years, he noticed the discrepancy between end of systole and end of ejection fraction others have described previously (H Suga. Jpn Heart J 1982, H Suga, N Nishiura. Jpn Heart J 1981 ,O Nishioka et al. Cardiovasc Res 1987) in his distributive shock PV loop data as well. 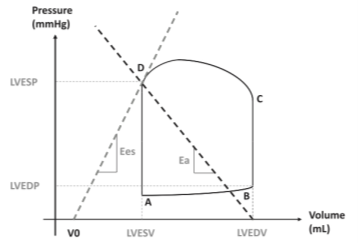 The point of end systole is of importance for calculating PV related parameters: EDPVR relation as a measure of the ventricular elastance and to compute arterial elastance as the end systolic pressure divided by the stroke volume.

When performing a vena cava occlusion under base line conditions, there is a nice linear relation between the points of end systole. Under shock conditions, the loops are tilted and the relation becomes less clear.

Therefore, the question becomes: How to determine end systolic pressure (or end of systole timing)?

Do you use an automatic detection based on LV pressure signal only (LV dP/dtmin + arbitrary threshold)? In the situation of septic shock this is not an option, as the software will clearly choose the wrong point in time on the loops.

Is end systole perhaps the same point in time as end of ejection and do you determine this manually (aortic dicrotic notch pressure) or via frequency domain analysis plus harmonics separation (the Fourrier analysis)? According to Dr. Herpain it is not, as this method will also lead to incorrect data.

The only correct method is option number three. End systole is the point in time when the contraction is maximal and thus the same as maximal elastance (EESPVR = Emax). You determine this using an iterative approach. A set of pressure volume relations at different points in time are calculated (isochrones). When the ventricular elastance at a specific point in time is than computed on the y-ax with time on the x-ax you will find the maximal elastance (Emax) as the peak of this graph. This method is described in the book Snapshot of Hemodynamics by Westerhof N et al. 3rd Ed. 2019.

If you are interested to learn how ventricular-arterial coupling, myocardial energetics and the myocardium O2 behave in this model of septic shock, please join us on the 29th June when Dr. Herpain will present a webinar discussing these topics . As this will be his 2nd webinar hosted by us, check our past webinars and listen to his previous presentation on "Part I: Heart Rate Control by Ivabradine or Esmolol in Septic Shock: Insights from a Large Animal Model." If you have question or are interested in collaborating with Dr. Herpain, feel free to contact him at Antoine.Herpain@erasme.ulb.ac.be.