On June 29th, we had the pleasure to again listen and learn from Dr. Antoine Herpain, ICU physician and scientist in that field. He is associated with Erasme Hospital and the Université Libre de Bruxelles where he studies heart rate control by Ivabradine or Esmolol in a swine model of septic shock.

In his first webinar, Dr. Herpain explained that Ivabradine is a good alternative for Esmolol, as it lowers the heart rate by reducing the slow diastolic depolarization phase without the inotropic and electrophysiological side effects of Esmolol treatment.

In his second webinar, he discussed in detail his studies on the mechanisms behind this finding. First focusing on 1) the ventriculo-arterial (V-A) coupling, followed by 2) myocardial energy and oxygen consumption and lastly 3) the myocardial oxygenation balance during septic shock and the subsequent Ivabradine or Esmolol treatment.

For those of you who have not read the first blog, which summarized Dr. Herpain’s first webinar, here is a little background on the large animal model of fecal peritonitis induced septic shock: Adolescent pigs were first fully instrumented via a percutaneous catheterization, which is crucial for pre-load assessment since it requires a closed chest and intact pericardium. Baseline measurements were performed after which the peritonitis is induced by intra-abdominal installation of autologous feces. The criteria for shock were reached 6-8 hours later. This phase was followed by a fluid resuscitation protocol and randomization into the different groups (control, Esmolol or Ivabradine). The last step in the protocol was a fixed dose of noradrenaline again followed by measurement after steady state.

V-A coupling is described as the Effective Arterial Elastance (Ea)/Left Ventricular Elastance (ELV). As the word “coupling” suggests, these two parameters are closely connected and balanced, ensuring an optimal cardiovascular system efficiency under countless physiological stimuli. There are, however, disease states in which these two parameters are uncoupled, for example heart failure during which Ea increases (ex: high blood pressure) while ELV decreases (ex. pump failure). In this shock model there was no uncoupling found as both parameters decreased moderately during shock, and neither one was significantly modified by Ivabradine or Esmolol treatment.

There are three major mechanisms within cardiomyocytes that require energy and oxygen. First of all, the cellular basal metabolism, which is quite constant. Secondly, the calcium handling between the extra- and the intracellular spaces and (mostly) between the sarcoplasmic reticulum and the cytosol of the cell. Thirdly, the oxygen and energy consumption required for contraction of the myosin fibers resulting in contraction of the ventricle wall. Of note, the two latter are deeply modified by the adrenergic stimulation of the heart.

Calculation of myocardial oxygen consumption (MVO2) from direct measurements is invasive and risky, especially in severe disease models, as it requires measuring coronary artery or coronary sinus venous blood flow and to determine oxygen levels on those locations. A well-established surrogate (please watch the webinar to understand why it is not an exact measure of MVO2) for these invasive measurements is the Pressure-Volume Area (PVA). PVA is the sum of stroke work (SW), the total area of the PV loop, and the Potential Energy (PE). You can calculate it after performing vena cava occlusions to determine the End Systolic Pressure Volume Relation (ESPRV) and the End Diastolic Pressure Volume Relation (EDPVR). In the context of Dr. Herpain’s research question, heart rate (HR) control did not reduce the PVA, as expected, as any decrease in HR is hoped to be compensated by an increase in stroke volume, and hence, in SW (in order to keep the cardiac output relatively constant).

As HR control is one of the goals of these studies, a parameter that takes HR into account is desirable in this situation, to integrate the MVO2 in the time dimension. The Total Power Output (TPO), the product of PVA and HR, was therefore calculated and a significantly lower TPO (oxygen consumption per minute) was found in the Esmolol group of septic shock with noradrenaline treatment, compared to control or Ivabradine. An alternative measure of oxygen consumption of the heart over time is the Triple Product (= LVPpeak x dP/dtmax x HR) and confirmed these findings.

The balance between oxygen consumption by the heart and oxygen delivery (MDO2) to the heart (MVO2 / MDO2) is significantly influenced by the HR. When HR increases, the diastolic phase, in which the left ventricle is perfused with oxygen rich blood, is shortened and MDO2 decreases. This relation is described in the Buckberg Index also known as the Sub-Endocardial Viability Ratio (SEVR). 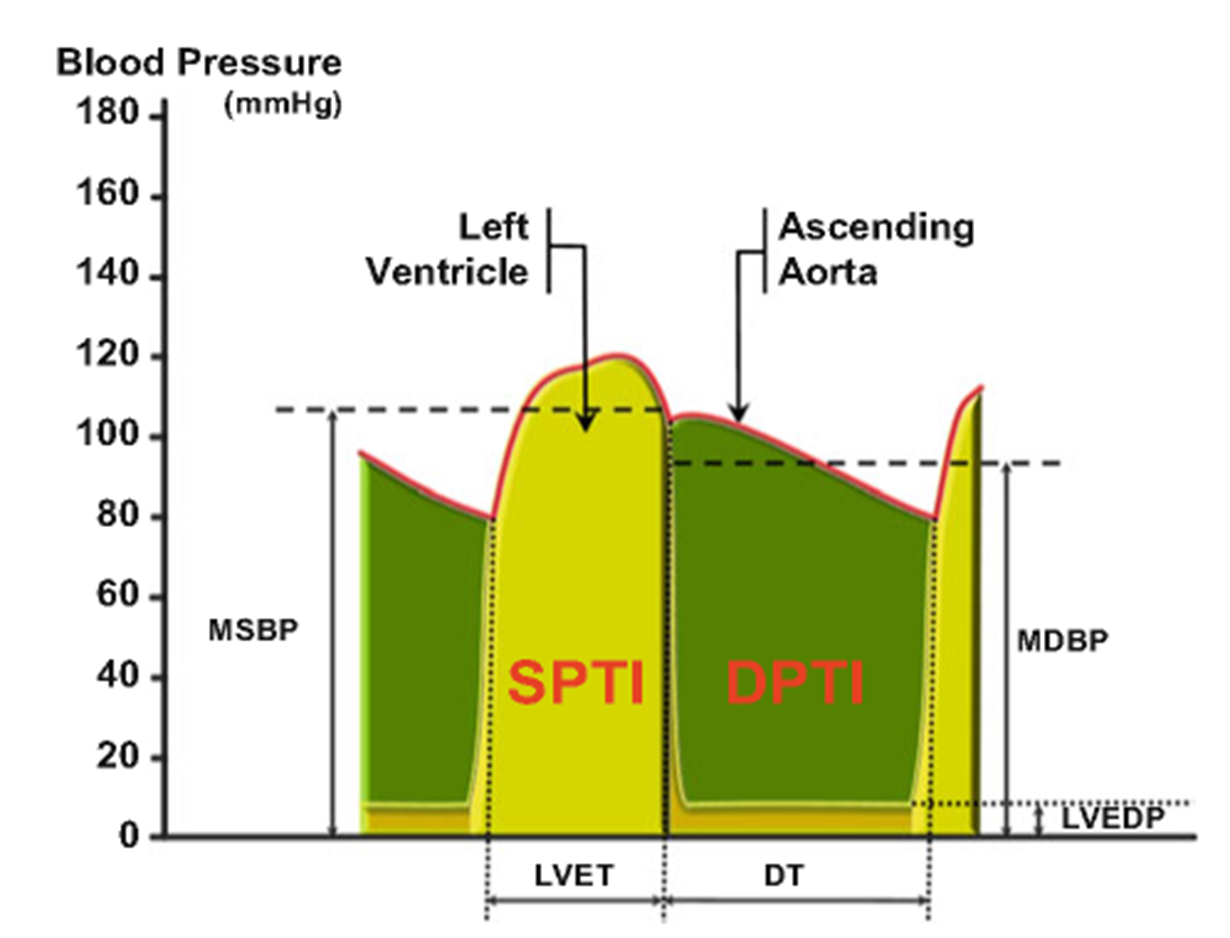 As the last piece of the puzzle, the SEVR decreased to levels well below 0.8 and stayed there, regardless of HR control treatment. This was due to a small increase in SPTI by HR control (again, related to the compensatory increase in stroke volume) and an “unfortunately” limited effect of the HR reduction regarding a potential DPTI extension, caused by the rapid aortic pressure decay in this specific context of septic shock.

As the author of both blogs associated with Dr. Herpain’s webinars, I have tried to give you a taste of the in-depth analysis performed by Dr. Herpain. However, I would like to invite you to watch the full webinars as this topic is complex and there is much more exciting information to share.

From our perspective, an important consideration in these studies was the technology used – our ADV500 Admittance Pressure-Volume system – and more generally the data type, pressure-volume loops. PV loops, in combination with aortic pressure signals, allow for a comprehensive analysis of the cardiovascular system – more information is better! Different indices can complement each other and provide in depth, but not necessarily straight forward, information from your research model. Thankfully, both Dr. Herpain (antoine.herpain@erasme.ulb.ac.be) and our Transonic application specialists are always available to answer any questions you might have about this topic, or the technologies used - we look forward to exciting scientific conversations. Let’s talk soon!