Do Adult ECMO Outcomes Depend on Institutional Volume?

Extracorporeal membrane oxygenation (ECMO) was instituted in 1972 as a last ditch effort to save children experiencing cardiac and or respiratory failure. During the first decades of ECMO therapy, it was not widely used in adults because studies had not 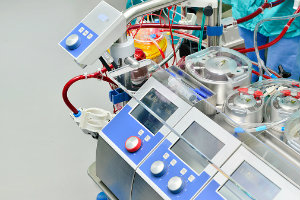 shown benefits for the adult population. However, within the last decade with better ECMO technology, patient management and the H1N1 swine flu epidemic of 2007-2008 that left patients with adult respiratory distress syndrome (ARDS), there has been a significant increase in adult ECMO.

A recent study published in the Annals of Thoracic Surgery, by Dr. F.H. McCarthy and colleagues from the Division of Cardiovascular Surgery, University of Pennsylvania Health System, Philadelphia, Pennsylvania, examined the relationship between ECMO outcomes and the volume of ECMO patients at an institution. There is generally a positive association between higher clinical volume for various medical procedures and improved outcomes. This has also held true for pediatric ECMO, where there is decreased mortality of patients at institutions that perform at least 30 pediatric ECMO cases per year.

For their study that examined adult ECMO outcomes in patients older than 18 years of age, the clinicians evaluated the outcomes at all institutions with adult 1,197 ECMO admissions in the Nationwide Inpatient Sample from 2002 to 2011. The annual number of ECMO cases at various institutions varied widely so the number of ECMO cases were calculated for each year at each institution. The institutions were then ranked as to greater volumes, medium volumes and lower volumes of ECMO patients. Their study revealed that, for the adult ECMO population, the traditional volume-outcome associations did not hold true. The mortality rate at low volume institutions was 48%; medium-volume centers, 60%; and high-volume centers, 57%. The clinicians discovered that, “Low volume ECMO centers consistently demonstrated no difference or better in-hospital mortality rates than did medium volume or high-volume ECMO institutions.” They concluded that ECMO outcomes in the Nationwide Inpatient Sample do not follow a traditional volume-outcome relationship, and these results suggest that, in properly selected patients, ECMO can be performed with acceptable results in U.S. centers that do not perform a high volume of ECMO.”