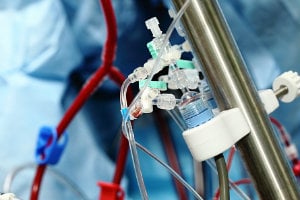 Charles Lindberg's place in the annals of aviation history was solidified when he completed the first non-stop solo flight across the Atlantic from New York to Paris in 1927. Instantly, he became an American hero, and the object of incessant media attention. The press dubbed him "Lucky Lindy" or the "Lone Eagle." Although the main focus of his life continued to be dedicated to aeronautics, including the mapping of major air routes around the world, few know that Lindberg was also a biomedical innovator.

Lindberg's sister-in-law Elizabeth Morrow suffered from a weakened heart due to a childhood bout of rheumatic fever. When Lindberg learned that surgery was not an option to repair the heart because the medical technology of the day could not provide an artificial heart pump which would enable the surgery, he decided to build such a pump.

Lindberg contacted Nobel Laureate Alexis Carrel at the Rockefeller Institute in New York. Working side by side in Carrel's lab, over several years, Lindberg developed a hand-blown, 18-inch-high, clear Pyrex glass perfusion pump that was used to keep organs functioning outside of the body. The device supplied or “perfused” the organ with a steady supply of oxygenated blood (or a synthetic substitute). While Carrel had perfected the fluid, there wasn't the mechanism to properly apply this to the organ. Lindberg's three-chambered device could be used to hold an organ in place and allow it to be perfused with Carrel’s “artificial blood.”

Although only 20 were ever made, (and three reside at the Smithsonian in Washington) the Lindberg perfusion pump paved the way for future medical devices such as the heart lung machine. Its process helped to develop a feasible means for stopping the heart during surgical procedures. The advance is said to have been a crucial step in the development of open-heart surgery and organ transplants, and to have laid the groundwork for the artificial heart.