The use of veno-venous (VV) ECMO for severe respiratory failure has increased exponentially around the world. Its popularity stemmed from the H1N1 influenza in 2009 that claimed the lives of hundreds of thousands throughout the world. Unlike other virus infections, H1N1 most drastically affected people under the age of 65. Therefore, extreme measures, such as ECMO, were taken to prevent the deaths of so many young people. 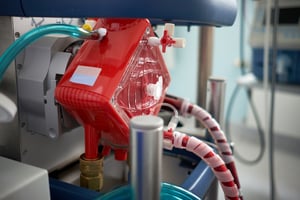 with refractory hypoxia. The lack of oxygen throughout the body affects all organ systems and will eventually result in death if not reversed. Intensive care teams turn to ECMO support for patients whose oxygenation status does not improve with conventional modalities.

Once VV ECMO support is initiated, the goal is to drastically improve oxygen delivery to the body and decrease ventilator settings to limit lung injury. Unfortunately, in instances of high recirculation rates, improved oxygen delivery does not occur. Recirculation, when oxygenated blood from the reinfusion cannula is directly absorbed by the drainage cannula, is a known phenomenon of VV ECMO. These patients often remain on high ventilator settings with low oxygen saturations – exact opposite of what bedside staff hope to see.

For years it has been difficult to quantify recirculation; limiting clinicians’ ability to improve their recirculation rates. However, new technology utilizing indicator dilution techniques can provide intensive care teams with the exact percentage of recirculated ECMO flow.

By quantifying the percentage of recirculation, staff can optimize oxygen delivery to the patient– the basis for VV ECMO support.