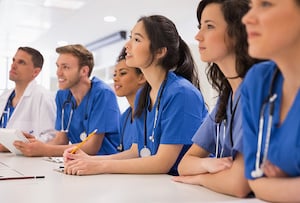 demanding and stressful. It’s so stressful, in fact, that nearly 70% of surgical residents report feelings of burnout. Researchers at the University of California, San Francisco (UCSF), found that without adequate coping skills, overwhelming stress among surgeons can cause performance deficits, surgical errors and poor professionalism.

The research team, led by Carter Lebares, MD, sought to discern whether mindfulness training could reduce the stress surgical trainees experience. Here’s what they found.

According to Dr. Lebares, her team wanted to investigate the effectiveness of mindfulness for medical students after the technique helped reduce stress in other high-stress occupations such as police officers and the military.

How Does Mindfulness Work?

Mindfulness meditation training involves the cultivation of moment-to-moment awareness of thoughts, sensations and emotions. It can help the practitioner develop non-reactivity in response to stimuli (physical and emotional) and metacognition.

“Mindfulness-based stress reduction and other mindfulness-based interventions may work by strengthening an individual’s ability to tolerate uncomfortable experiences through training in nonreactivity to difficult thoughts, events, and emotions. Such nonreactivity may reduce the magnitude of perceived stress, which theory and empirical work suggest is stimulating to a point, after which impairment occurs,” Lebares, et al. wrote.

Researchers found the surgical residents who practiced mindfulness had:

Residents who participated in the mindfulness training had double the increase in their mindfulness scores over the control group.

How Mindfulness Has Affected Surgical Residents

The UCSF Center for Mindfulness in Surgery, run by Dr. Lebares, sought to discover the role mindfulness can play in reducing stress for surgeons. Dr. Lebares and her team have published several studies on the topic and provide ways for surgical residents to practice mindfulness.

“At work I am much less reactionary to pages, nurse requests. I have somehow gained some ‘space’ [between] certain stimuli and my reaction to them. I take a moment to understand my role and how it relates…improving my interaction with them, with my patients,” wrote one resident who practiced mindfulness.

Another shared: “It’s allowed me to parse out my stress: lack of control makes me stressed. I’m learning to accept what I can’t change and let it go. Breathing, letting it pass. I take mini-breaks inside my mind, then I focus better the remainder of the day.”