Analysis of a Bypass Graft Waveform: 5 Things to Look For 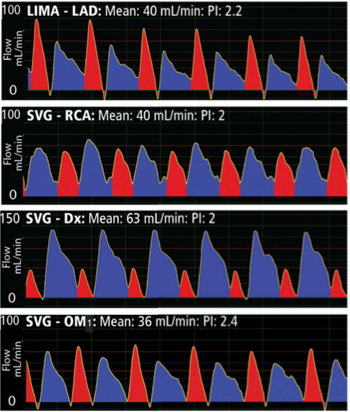 Analysis of a flow waveform is useful when the mean flow of the bypass graft is questionable, between 5 mL/min and 20 mL/min. But what should one look for? First, the waveform should have a smooth, repeatable flow profile. Secondly, there generally should be clear definition of a biphasic waveform representing systole and diastole as shown in the following example of four patent grafts in an 83-year-old patient.

However, waveforms can differ considerably depending on the following:

The waveforms below demonstrate unusual profiles with strong diastolic components in all the waveforms, but with almost no systolic flow in the left heart LIMA-LAD and SVG-Dx grafts and small systole in the right heart OM1, OM2 grafts. This is most often due to sub-myocardial coronaries, and, if mean flow is adequate, has no bearing on anastomotic quality of the grafts. 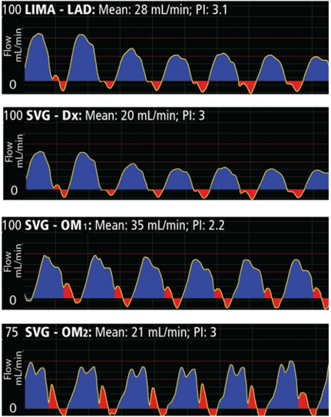